People with a bank or credit union account are better positioned to participate in the economy and contribute to the nation’s recovery. Banks and credit unions allow people to save assets for future investments, as well as build the positive credit history needed to access affordable credit. However, a large number of Mississippi households do not have access to basic financial tools like checking and savings accounts. According to the 2014 Assets & Opportunity Scorecard, which examines Americans’ financial security, 38.7 percent of Mississippi households are either unbanked or underbanked. The high number of unbanked households, coupled with Mississippi’s high poverty rate (22.3 percent), provides insight into some of the barriers that financially underserved Mississippians face. 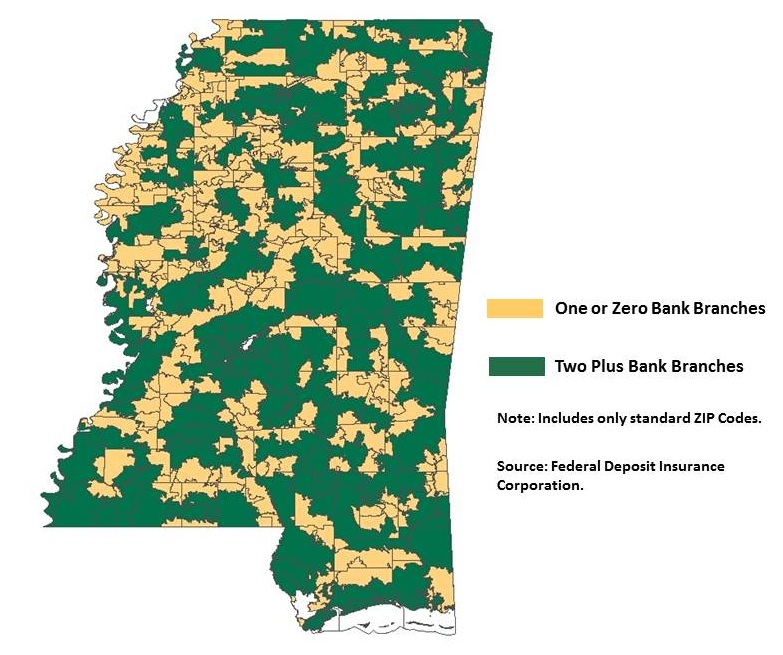 Accordingly, a recent report from the Office of Inspector General found that approximately 34 million households in the United States live at least partially outside the financial mainstream. These households use non-bank services, like payday loan providers—services that deplete rather than preserve income and wealth. As a result, households that live outside the financial mainstream spend nearly 10 percent of their annual income on interest and fees from non-bank services; the same amount that most Americans spend on food each year. They are also more likely to live in underserved communities known as “bank deserts.” Bank deserts are defined as ZIP Codes with zero or one bank branch. In Mississippi, 69 percent of ZIP Codes have zero or one bank branch – out of 533 ZIP Codes in the State, 369 have one bank or fewer (See Map). Further, experts from the banking industry predict that banks will continue to close branches across the country (approximately 2,300 branches closed in 2012), particularly impacting low-income and small, rural communities – where many of the underserved live.

The data underscore the importance of implementing policies that eliminate bank deserts and create opportunities for families, businesses and communities. Examples of such policies include expanding support for Community Development Financial Institutions (CDFIs) and Community Development Credit Unions (CDCUs) that continually work to meet the needs of historically underserved populations.