A new report from Hope Policy Institute highlights the impact of the New Market Tax Credits (NMTC) in the Deep South as well as other persistent poverty areas and communities of color.  The potential of the NMTC program cannot be fully realized until persistent racial disparities within the program are addressed.  From 2012 to 2020, organizations led by people of color were awarded 11% ($3.7 billion) of the total NMTC allocations compared with the 89% ($29.5 billion) awarded to white-led organizations.

The federal NMTC program finances community facilities and businesses which support economic development, job creation and the expansion of essential community services such as quality health care, education, and other services to underserved communities.  The program leverages private capital to encourage investment in low-income communities.

Many communities in the Deep South are still experiencing the consequences of centuries of policies such as slavery, land theft, and redlining, that have extracted and redistributed wealth and resources and contributed to generational poverty.  Further, the history of exploitation and extraction of wealth from Black persons in the Deep South have contributed to large racial economic disparities.  The NMTC is a tool that can help reverse these conditions.

NMTCs are allocated to Community Development Entities (CDEs), organizations that serve low-income communities, through a competitive application process.  Those organizations then partner with private investors to deploy economic investments in their communities.  The benefits of a NMTC allocation go beyond the critical community investments deployed by CDEs in distressed areas.  A NMTC allocation also provides an infusion of capital for the CDEs and earned revenue that can then be the basis for growth and attracting other types of investment for years to come.  This is especially important for financial institutions and community development organizations led by people of color that are historically undercapitalized compared with white-led institutions.

The table below shows the percentage of NMTC allocations that have gone to Minority-owned or Minority-controlled CDEs from 2012 to 2020.  The percentage, since 2012, has ranged from 5% in 2014 to 16% in 2017.  To put these numbers in perspective, even in 2017, when more credits were awarded than at any other time in history, minority CDEs received $576 million dollars while white-led CDEs received over $3 billion.  Most recently, for the 2020 NMTC allocations announced September 1, 2021, only 13% of the $5 billion allocation was awarded to minority-led CDEs. 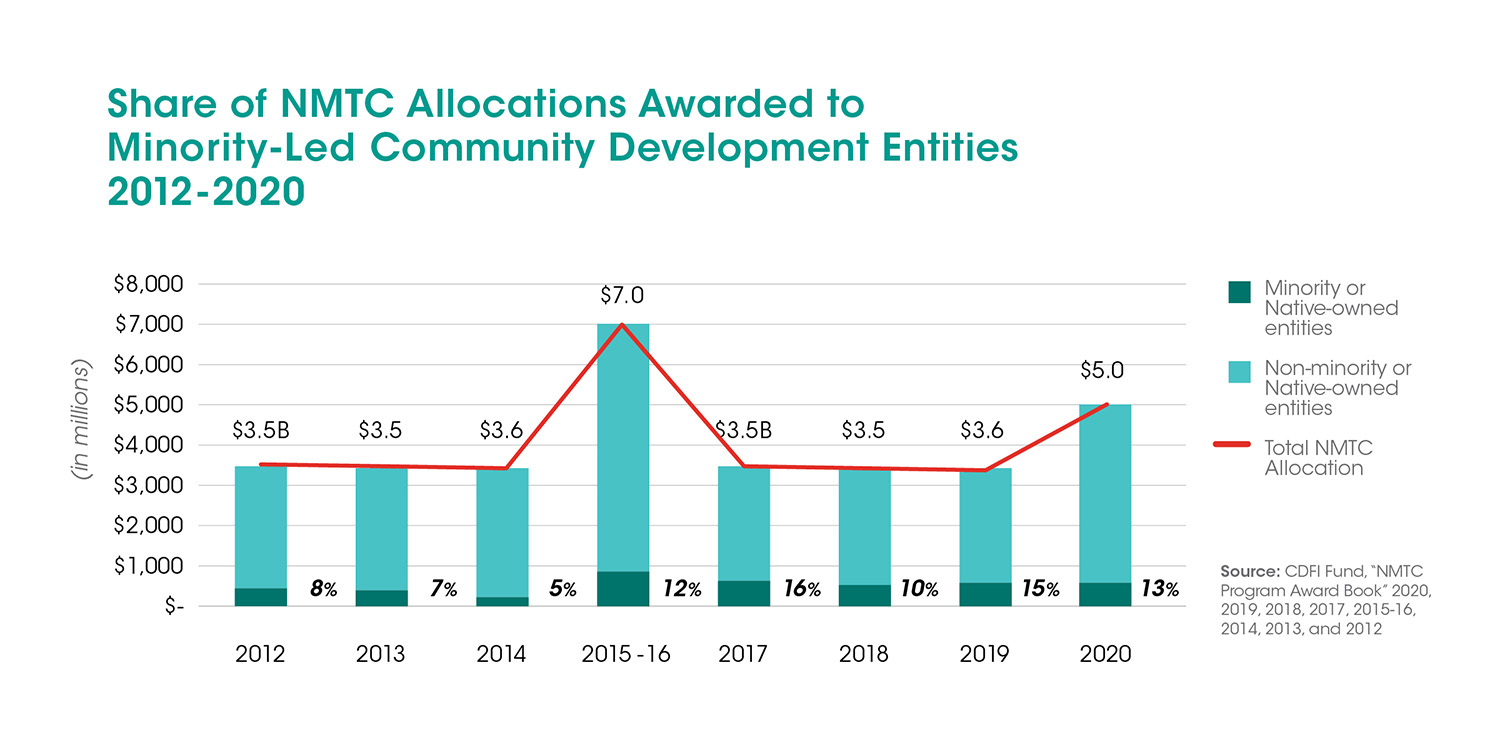 Congress and the CDFI Fund should work to remove barriers for CDEs led by people of color and implement measures that will explicitly encourage greater success for Minority-led CDE applicants, particularly those with a long track record of serving communities of color and seeking to expand that impact via the NMTC program.

HOPE outlines several recommendations for expanding access in the full report.  Among them, HOPE recommends that Congress study these racial disparities in the NMTC and solutions to address them.  One potential solution would be to set aside a portion of NMTC allocations specifically for CDEs led by people of color similar to the set aside for Rural CDEs.  In conjunction with the development of a set aside, the definition of Minority-led CDEs should take into account an organization’s track record of serving communities of color.

HOPE has been involved with the NMTC program throughout its history, making targeted investments in the communities with the most need throughout the Deep South and in the projects that will have the most impact in our communities. Looking ahead, HOPE will advocate for policies that will make the NMTC program even more useful as a tool for resilience for persistent poverty areas and communities of color to reverse the effects of generations of exploitive policies and under investment. Its impact can be multiplied by increasing investments in organizations rooted in persistent poverty communities and in institutions led and controlled by people of color.