This post details key findings of the state’s universities from the Institutions of Higher Learning (IHL).

How Funding Limits Have Impacted Universities

Across the university system, enrollment has reached an all-time high this year, with 7 out of 8 universities experiencing the highest enrollment in their history. When increasing enrollment is not matched with proportional funding increases, universities must look for efficiencies to make ends meet. IHL Commissioner, Hank Bounds noted that some of these “efficiencies” hurt students.

Changes in the Makeup of University Funding

Beyond students, the university system has adjusted to changes in state funding by increasing tuition and enrollment. To make up for gaps in state funding, tuition now constitutes a greater share of university revenue than it did 14 years ago. In FY 1998, 54 percent of the university system’s revenue came through state appropriations, while 33 percent came from tuition. By FY 2012, the two funding sources flipped, and universities now depend on tuition for 57 percent of their funding. 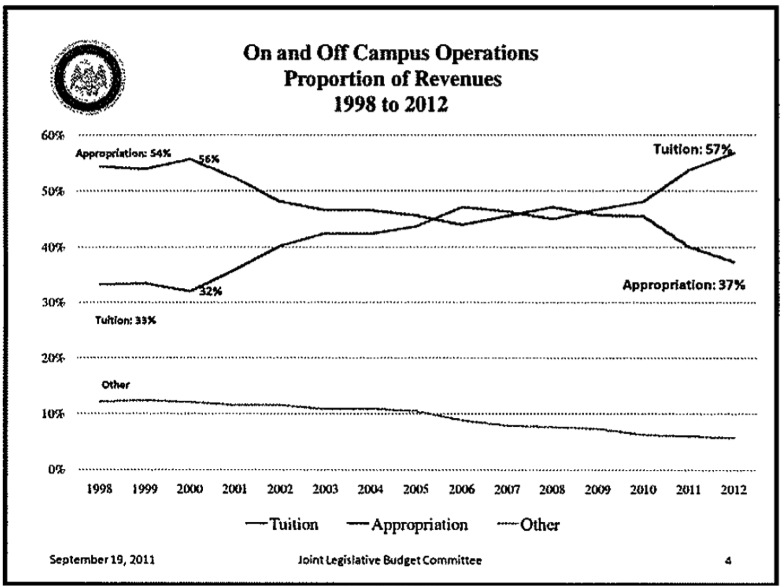 Federal and State Funding Streams May Continue to Tighten

Commissioner Bounds underscored concerns that funding streams from both the federal and state level are tightening and have real implications for university faculty, students, and research. Lower levels of funding through the National Science Foundation and National Institute of Health could substantially decrease research revenue for each campus. Scaling back Pell Grants could also substantially impact students that need additional financial support to pursue university courses. Cuts in Pell Grants would impact revenue coming into Mississippi’s universities, all of which enroll many students who use Pell as a major source of funding to move through higher education.

Funding limits for the state’s eight universities are having a substantial impact on students, faculty, and academic departments. Uncertainty around federal funding for research and tuition support for low- and middle-income students places additional funding constraints to universities on the horizon. Investing in education provided through the state’s university system remains critical for economic development and workforce preparedness. This underscores how important it is that Mississippi pursues a path that supports higher education, job creation, and economic security through a balanced approach that includes increasing revenue.