In May, the Federal Reserve Board released findings from its annual Survey of Household Economics and Decision Making. Commonly referred to as the SHED report, the publication provides insights into the overall “economic well-being” of households in the United States. Importantly, the survey synthesizes data collected by race and income which allows one to measure disparities across a variety of financial indicators. Also of note, data were collected in October / November of 2021 and reflect sentiments of households in the fall. Over the next two blogs, we will highlight high-level findings. This first dive into the SHED report spotlights banking, credit and housing outcomes.

Longstanding disparities in banking access continued to persist in 2021. The percentage of Black and Hispanic households reporting being fully banked lagged significantly behind white and Asian households (Chart 1). 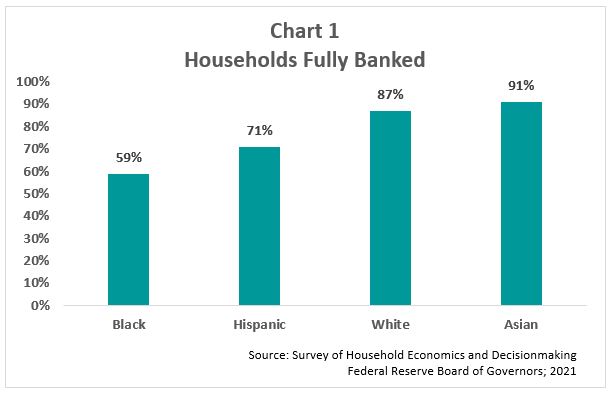 Gaps in banking and credit access are best addressed through increased investment in historically underserved communities and the institutions that expand financial service access. Community Development Financial Institutions (CDFIs) and Minority Depository Institutions (MDIs) with long track records of success serving people and communities of color represent a proven approach for advancing this goal. Long term, sustained efforts to capitalize MDIs are vital to ensuring MDIs remain a viable option for people systemically overlooked by the banking sector – particularly in the Deep South.