High-cost loans in Memphis carry different names: payday loans, car title loans, or flex loans, for example. They also have many shared characteristics which have devastating consequences for people: triple-digit rates, unaffordable terms, and coercive repayment mechanisms, like the ability to seize money from a borrower’s bank account or their car. Even though these loans are marketed as a quick financial fix, the reality is that they are a debt trap by design.  Payday lenders in Memphis charge over 400% APR (annual percentage rate). These loans create a cascade of consequences such as increased likelihood of overdraft fees, loss of their cars, defaulting on other bills, involuntary bank account closures and even bankruptcy, as well as psychological stress caused by unaffordable debt and the inability to build wealth in the future.

The burdens of these devastating loans are concentrated primarily in Memphis’s communities of color, and the financial benefit of the fees drained by these triple-digit debt traps flow to a small handful of companies.

High-cost lenders are disproportionately located in Memphis neighborhoods with higher percentages of Black and Latino residents. These patterns are enabled by and reinforce long-standing residential racial segregation and exclusionary lending practices, such as redlining, predatory mortgage lending, and restrictive covenants. The wealth-stripping effects of high-cost loans limit economic mobility for individuals and perpetuate long-standing racial and economic inequalities. In Memphis, 20% of white households are liquid asset poor, compared to more than 50% of Black households and more than 60% of Latino households in the city. High-cost loans, through their fee extraction and economic consequences, perpetuate this gap. 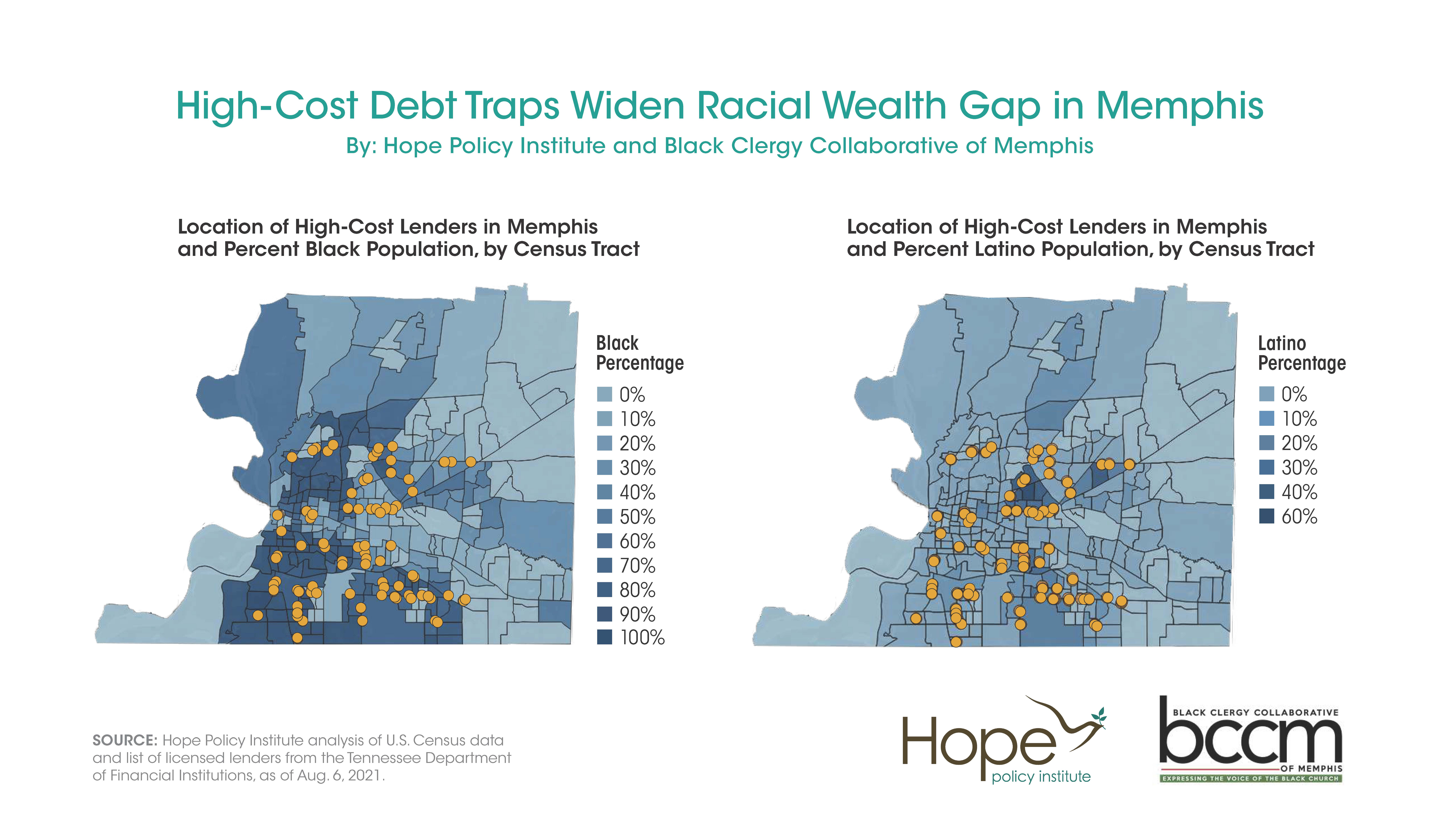 State and federal policymakers have the authority to rein in the harms of these high-cost loans and should do so by lowering the costs of these loans and ensuring lenders cannot trap people in endless cycles of unaffordable debt.  The most effective way to stop the debt trap is for policymakers at the state and federal level to cap the rates at 36 percent or less. This protection is already in place at the federal level for active-duty members of the military, and in 18 states plus the District of Columbia. Both the state legislature and Congress have the ability to enact a cap to stop the debt traps in Tennessee. Finally, the Consumer Financial Protection Bureau (CFPB), a federal watchdog agency to prevent unfair, abusive and deceptive financial practices, has the authority to rein in harmful high-cost lending practices and, more importantly, the ability to issue new rules that stop high-cost lenders.

To read more about the consequences of high-cost lending in Memphis and for distribution of storefronts by zip code, download the full report by Hope Policy Institute and Black Clergy Collaborative here.