HOPE was established to ensure that all people regardless of where they live, their gender, race or place of birth have the opportunity to support their families and realize the American Dream. Since 1994, HOPE has generated over $2.9 billion in financing that has benefitted more than 1.7 million people throughout Alabama, Arkansas, Louisiana, Mississippi and Tennessee.

Since the launch of the New Markets Tax Credit (NMTC) program in 2003, Hope Enterprise Corporation (HOPE) has had the opportunity to invest $212 million in NMTC financing in the communities we serve. Throughout the program, HOPE has advocated for innovative uses of NMTCs to best meet the needs of low-income communities and communities of color in the Deep South, both urban and rural.

HOPE was involved with the effort to create the program, working with Congress and the Clinton and Bush administrations during its passage and implementation. HOPE’s CEO, Bill Bynum was Chairman of the CDFI Fund Advisory Board from 2002-2012.1

After implementation, HOPE was instrumental in the removal of barriers so that nonprofit organizations could benefit from the NMTC structure and piloted the leverage loan structure that is widely used in the program today.

As a Minority-controlled Community Development Entity (CDE) and a designated Minority Depository Institution (MDI) by the National Credit Union Administration (NCUA), HOPE is well situated to provide not only financial services and make targeted investments in Black communities but also advocate for policies that will help close the racial wealth gap caused by generations of under investment and extraction.

Under consideration in this notice and request for public comment, is the NMTC program application used to collect data that once evaluated, will direct $25 billion in investment over the next five years in distressed communities. Relevant to this discussion is the way the application and scoring process and the resulting distribution of allocations can explicitly address or sustain the racial wealth gap that persists even among financial and community development institutions.

The importance of investing in Minority-led Community Development Entities
Research from the FDIC has shown that Minority Depository Institutions (MDIs) are a proven way to advance economic mobility in Black communities. MDIs are located in Black communities and serve their communities more equitably. An estimated six out of 10 people living in the service area of Black owned banks are Black, in contrast to six out of 100 for banks that are not Black-led. 3 Additionally, the study found that Black owned financial institutions originate a substantially higher proportion of mortgages and small business loans to Black borrowers than non-minority financial institutions.4

In addition to where investments are being made, it is important to look at the types of businesses being supported by NMTC investments. One specific way that the proposed NMTC application has collected data on who potential CDEs are serving is by showing the percent of their investments that go to Disadvantaged Businesses or Disadvantaged Communities. This analysis should remain a part of the NMTC application and the definition of Disadvantaged Businesses should not be changed as proposed to eliminate businesses that have inadequate access to investment capital. This is a key factor in evaluating a CDE’s experience deploying investments where they are needed most, especially for businesses led by people of color who are often the very ones facing underinvestment.

Similarly, while changes are currently not proposed that would broaden the definition of Minority-owned or Minority-controlled CDEs, HOPE would be opposed to any recommendation that would include CDEs with less than 51% of minority equity ownership or board membership. The CDFI Fund should consider including measures in addition of ownership and governance that take into account an organization’s track record of serving communities of color. A recent example is of such a definition is the designation “minority lending institutions,” as included in the Consolidated Appropriations Act of 2021 which could be broadened to include activities of non-lender CDEs.

A “minority lending institution” is a CDFI where a majority of both the number and dollar volume of arm’s-length, on-balance sheet financial products of the CDFI are directed at minorities or majority minority census tracts or equivalents; and is (1) an MDI as defined by FDIC or NCUA or (2) meets other standards of accountability to minority populations as determined by the Fund.5

Allocations for Minority-led Community Development Entities represent a small portion of NMTC allocations overall
The benefits of a NMTC allocation go beyond the critical community investments deployed by CDEs in distressed areas. A NMTC allocation also provides an infusion of capital for the CDEs themselves that can then be the basis for other types of investments for years to come. This is especially important to Minority-led financial institutions and community development organizations that are undercapitalized compared with white-led institutions. This disparity can be seen by looking at CDFI Fund awardees. Persistently for every year in a 15 year span, the median asset size of white-owned CDFI Fund awardees has been at least twice the median asset size of Minority-owned awardees. In some years, it was 3 times as high.6 Similarly, racial disparities appear in the New Market Tax Credit Program. The chart below shows the percentage of NMTC allocations that have gone to Minority-owned or Minority-controlled CDEs over the last several years for which data was available. The percentage since 2012 has ranged from 5% in 2014 to 16% in 2017 and 15% in 2019 (Figure 2).

It is unclear if this is representational to the proportion of the number of Minority-owned or controlled CDEs because there is no comprehensive dataset of CDEs by ownership demographic. In either case, it is clear that white-owned CDEs are the significant majority of recipients of NMTC allocations even though Minority-owned or controlled financial institutions are often serving or located in communities with greater economic distress. 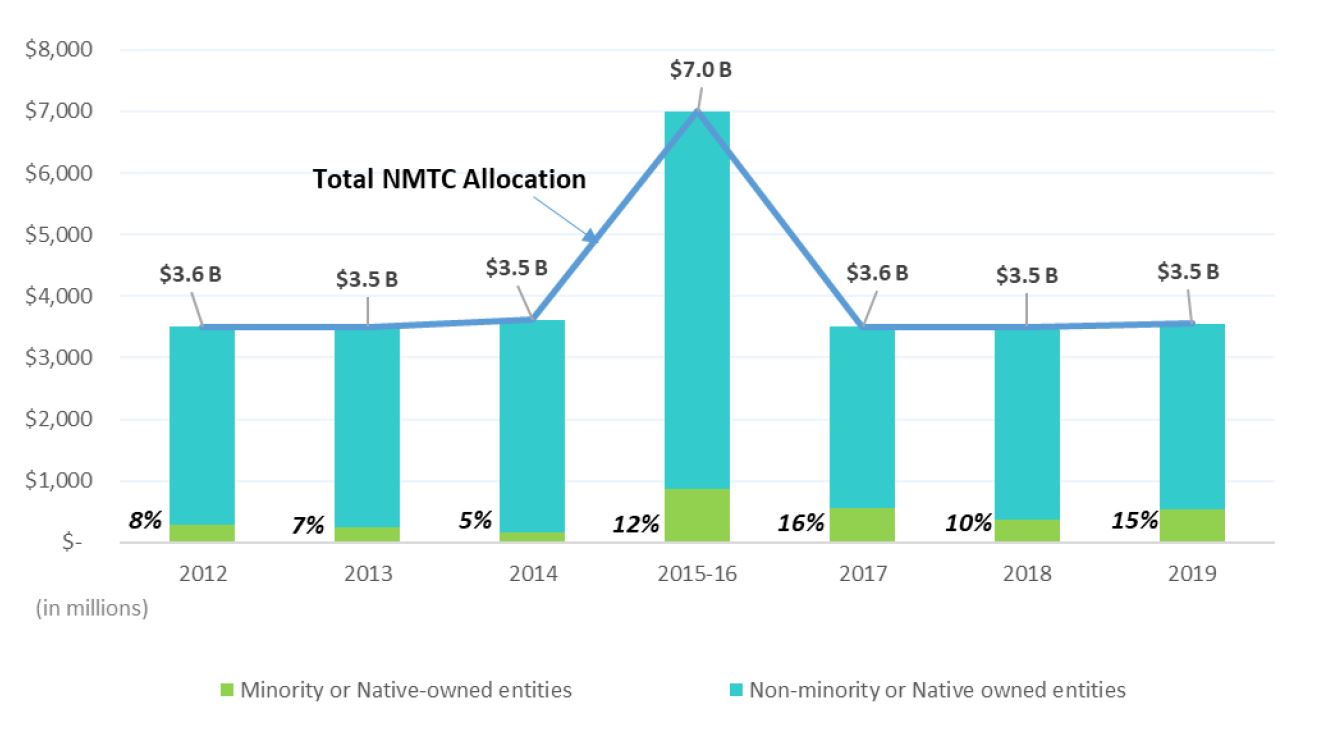 The racial wealth gap is the result of systemic exploitation and extraction of the people and resources of a community. It is the result of centuries of policies such as slavery, land theft, and redlining, that have extracted and redistributed wealth and resources and contributed to generational poverty. The result of this extraction and exploitation can still be seen today as high unemployment, poor health outcomes, and lack of access to financial institutions7. The New Markets Tax Credit is an important tool that can help reverse this extraction. Its impact can be multiplied by increasing investments in Minority-led institutions.

Thank you for your consideration of this information. HOPE appreciates the opportunity to provide comments on the NMTC Program Allocation Application and the continued leadership of the CDFI Fund in deploying critical investments in distressed areas and foster economic growth in our communities.