Is Mississippi Facing a Generational Divide?

The 2010 Census provided a look into the changes of Mississippi’s and the nation’s population. A piece by Bill Frey, a demographer for the Brookings Institution, discusses how shifts in the nation’s population in age and race shape the need for a policy dialogue that bridges gaps across races and generations.

The MEPC blog has noted that Mississippi’s population under 18 is made up of more children of color than white children. Much like the nation, the shifting demographics in Mississippi have resulted in substantial differences in the state’s population by race and age. In 2010 the median age of African American Mississippians was 10 years younger than that of white Mississippians (see chart). 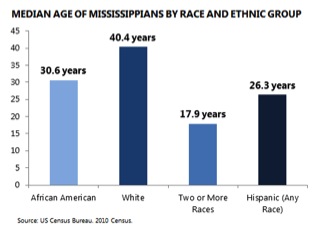 The differences between race and age distribution mean a larger portion of Mississippi’s white residents are also nearing retiring age than individuals of other racial groups. Close to 1 in 3 white residents were over age 55 in 2010 and within 10 years of retirement. At the same time, less than 1 in 5 African Americans were over age 55 and less than 1 in 10 residents of two or more races were within 10 years of retirement (see chart). The age distribution of the state’s labor force and a larger portion of aging white residents signal potential shifts in the state’s labor force makeup in the years ahead. 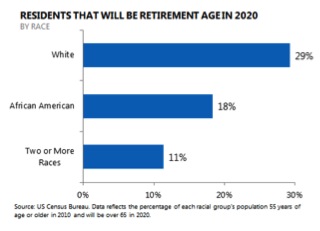 What do the shifts in demographics mean for policy priorities and leadership?

Frey noted older Americans, understandably, tend to focus on priorities important for their short-term future like Social Security and Medicare, but that attention also needs to be dedicated to priorities that ensure opportunities for prosperity in a more diverse younger generation like education, health care and affordable housing.

Such investments are particularly important in Mississippi where half of all African American children and 1 in 5 white children grow up under the stress of poverty. The children represent the state’s future workforce and making critical contributions that open pathways to opportunity now can solidify a better future for all Mississippians, regardless of age or race, in the years ahead.