Is The Gap Between Men’s and Women’s Wages Getting Larger? 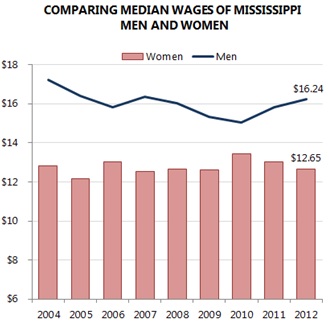 However, wage data from 2011 and 2012 raises questions about whether there was a permanent narrowing of the gap, or a temporary effect from the economic constraints of the great recession. After adjusting for inflation,   men’s wages are on the increase over the last two years, while women’s have fallen.  In 2012, women’s wages equaled 78% of men’s – a lower percentage than 10 years before in 2002. In the U.S., women’s median wages were 82% of men’s in 2012.

For both genders the 2000s showed much slower wage progression than in  the 1990s.

How do workers in Mississippi stack up against workers nationally?

These wage trends suggest that efforts to narrow the separation between men’s and women’s wages are still needed in Mississippi and nationally. Women make up close to half of our state’s labor force and a persistent difference in wages by gender has broad implications for families and the economic security of women. 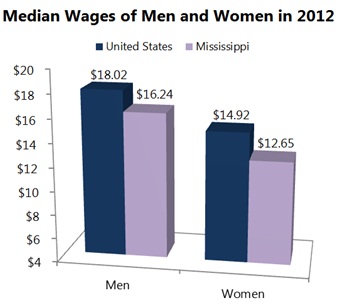 Up Next: We’ll compare wages between different demographics in Mississippi and the South.