This past Sunday marked the start of National Women’s Health Week—an observance that unites communities, businesses, the government, health organizations and other groups in a week-long effort to promote women’s health and its importance.In light of this event, MEPC would like to highlight a recent Fact Sheet from the Center on Budget and Policy Priorities which found that nearly 6 Million women between the ages of 19 and 44 who are currently living without health insurance could gain health coverage if all states expand their Medicaid programs in 2014.

Medicaid Expansion Matters for Women in Mississippi
Approximately 45% of low-income (at or below 138% FPL) adult women of childbearing age (19-35) in Mississippi are uninsured.[i] Furthermore, 36% of pregnant women in Mississippi in 2010 reported being uninsured prior to their pregnancy. Under current eligibility rules (Shown in Figure 1, below), many women only become eligible for Medicaid when they become pregnant and then lose that coverage soon after giving birth. Lack of coverage can impact the preconceptual health of women, contributing to poor birth outcomes.[ii] 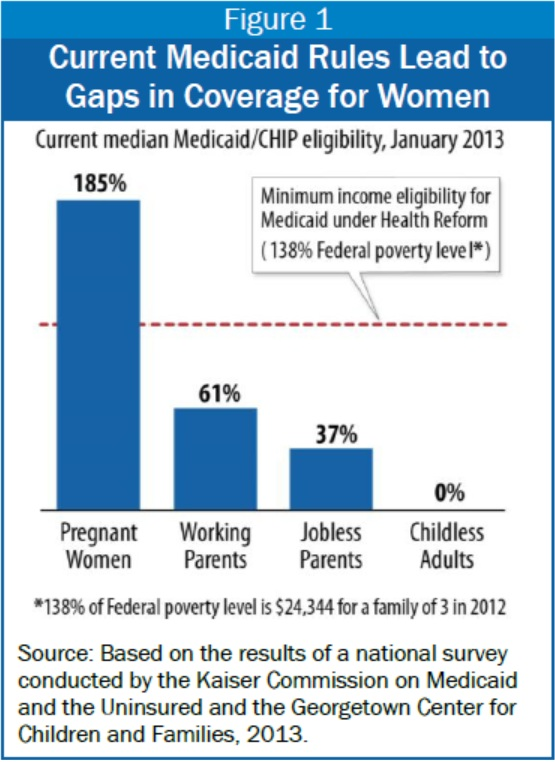 Nationally, Mississippi has the highest rates of low-birthweight babies, infant mortality and preterm births. When women have health coverage before becoming pregnant, as well as between pregnancies, they are healthier during pregnancy and their babies are more likely to be healthy at birth. Expanding Medicaid in Mississippi would provide healthcare coverage to low-income women regardless of whether or not they are pregnant—resulting in better health outcomes for both the women who gain coverage and the children they have.

Medicaid expansion is a vital opportunity for our state to close gaps in the health coverage of low-income women and their children.  If Mississippi does not accept these federal dollars, hardworking women and families will remain uninsured or experience a gap in health coverage.
Author: Francinia McKeithan Henry, Policy Analyst/ SFAI Policy Fellow