The budget hearings kicked off yesterday with a presentation made by the Mississippi State Personnel Board (MSPB). In a blog post earlier this year, we highlighted the importance of state workers to Mississippi’s economy. During the presentation, several interesting pieces of information were shared: 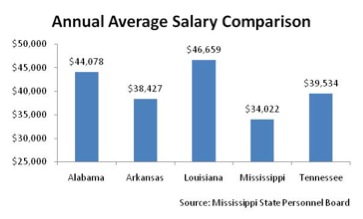 One final interesting piece of information includes the rate of state employment growth over the last decade. In Fiscal Year (FY) 2001, there were 32,856 employees, on average, under the MSPB. In FY 2010, there were 32,800 employees on average. As discussions around the budget tighten, public sector workers will undoubtedly draw attention. It’s important to remember that these workers provide vital services, such as keeping communities safe, that Mississippians depend on in easy times and in difficult economic environments.