Mississippi’s Racial Gap in Unemployment is 2nd Highest in Nation

KEY POINTS FROM THE BRIEF INCLUDE: 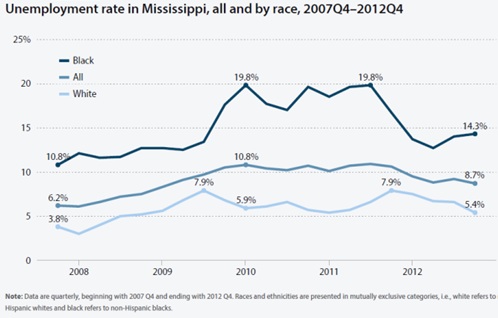 Education attainment, access to professional networks, and an older white workforce potentially all play into the enduring gap in both earnings and unemployment by race. At the peak of the recession 1 in 5 African American workers was looking for work and unable to find a job compared to 1 in 13 white workers. As with disparities in wages, the gap between white and black unemployment rates dramatically affects the economic trajectory of families across Mississippi.

Such wide disparities cannot be sustained. In the past, we’ve blogged about the report – Equity as the Superior Growth Model – which underscores that our state’s future hinges on our ability and willingness to give all of Mississippians the advantage of investments in the public structures that lead to advancement, opportunity and growth.  Targeted investments in early childhood, K-12, higher education among the most vulnerable children and communities are essential to moving the state forward.  Also, strategies that build wealth amongst the state’s low-income and minority populations through small business ownership are critical to creating jobs and opportunity for all of the state’s residents. All of these priorities are a part of a broader need pressing the state of Mississippi – to reduce current disparities, so all citizens can benefit from greater prosperity.