Mississippi’s Unemployment Rate is 3rd Highest in the Nation 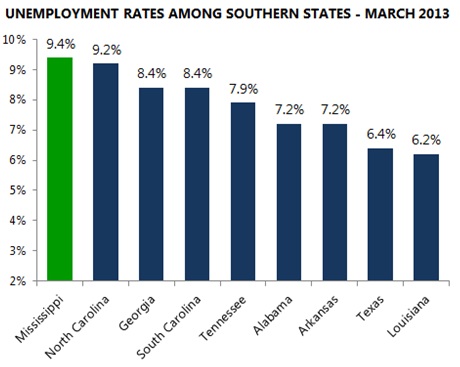 Mississippi is one of a handful of states where the unemployment rate has risen since March 2012 underscoring that economic strain continues to be felt among employers and the state’s workforce. However, it is worth noting that previous data on jobs have been revised to show that Mississippi’s economy added more jobs in 2012 than previously thought. Initially the BLS showed that employment in the state declined slightly through the year, but updated estimates illustrate a 1% increase in job numbers. The update is a positive change with the business services sector and leisure and hospitality sector both showing job growth over the last year. Mississippi’s labor market still has significant gains to make before it reaches pre-recession levels. There are 45,000 fewer jobs available today than there were in early 2008.

Throughout April, the Policy Matters blog covered several issues related to Mississippi’s tax structure. One blog by Sara Miller features an overview of rankings for the Best Business States. The post highlights that economic competitiveness rankings often consider a state’s public investments in health care and education- critical factors that affect the well-being of residents and workers. Mississippi ranks low in both these areas- underscoring that job growth in the short and long-term potentially depend strongly on our state’s ability to invest in public structures that support residents.