A report released today by the Citizens For Tax Justice shows the effect of continuing federal income tax cuts enacted during the administration of President Bush on Mississippi taxpayers. The tax cuts are set to expire at the end of 2012. President Obama has proposed extending only those tax cuts on income up to $250,000 while Congressional Republicans have proposed to maintain the tax cuts at all income levels.

The figure below shows how the two federal income tax cut proposals would affect Mississippians by income group. Those with the highest 1% of income would get a much larger tax cut under the Congressional Republican plan. Middle and lower income groups would get a larger tax cut under the President’s plan due to the extension of the expanded Earned Income Tax Credit and Child Tax credit enacted during the recent recession. 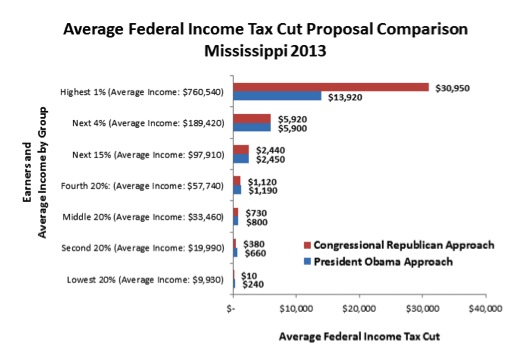 Only 1.9% of Americans and 0.8% of Mississippians would lose the tax cuts next year under President Obama’s proposal. However, with the rolling back of the tax cuts on Americans with high income the President’s proposal would cost $1 trillion less over the next 10 years than the Republican plan.

According to the report,  “Some claim that the economy will suffer if the tax cuts expire as scheduled . . . but the expiration of the tax cuts enacted under President Bush would only mean that the tax rules revert to those in place at the end of [President Clinton’s term], when the economy was performing better than it is today.”

Noted economist Mark Zandi, a former advisor to Senator John McCain during his candidacy for president, testified (as shown in the figure below) that the continued tax cuts would spur less economic activity than using those funds to invest in programs like infrastructure, unemployment insurance and Supplemental Nutrition Assistance Program (formerly food stamps). 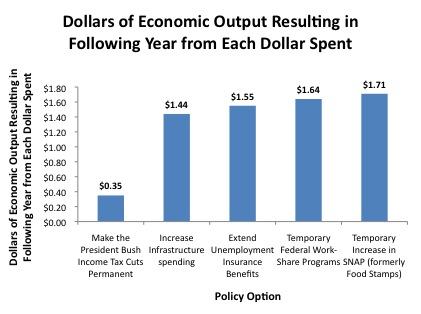 The President’s plan to roll back the tax cuts on those in the highest income group would affect less than 1% of Mississippians, but would allow for federal investments that are vital to Mississippi’s prosperity and would do more to spur economic growth in our state.  Additionally, the President’s proposal costs less over time – an important consideration as the nation looks for policy solutions to address our debt and deficit.