The previous posts addressed the increasing gap between the state tax threshold and the federal poverty line and introduced a state Earned Income Tax Credit (EITC) as a potential solution.  This post will explain more about instituting a state EITC in Mississippi.

Who Is Eligible, and For How Much?
In the 2011 tax year, over 26 million working families and individuals received the federal EITC—including 404,394 Mississippians.  The amount of the EITC depends on a recipient’s income, marital status, and number of children (See figure below).  Each tier of benefits rises with earned income until it reaches a maximum level and then begins to phase out at higher income levels.   For example, the highest credit amount of $5,751 is for married filers with three or more children and a household income between $13,000 and $21,000, while the highest credit amount for married filers with one child is $3,094. 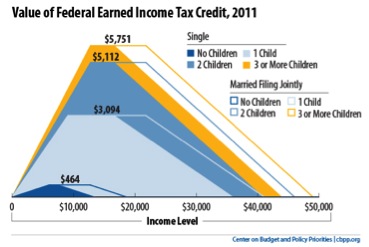 Encouraging and Rewarding Work
The EITC is designed to promote and reward work.  Only families with at least one member in the workforce are eligible for the credit.  Starting with the first dollar, a worker’s EITC grows with each additional dollar of earnings until the credit reaches the maximum value.  The amount of the credit rises as income increases until it reaches a maximum amount and then begins to phase out at higher income levels.  This “phasing out” effect ensures that a family does not lose its EITC benefit based on a single dollar of income.   Research has shown that most families use the EITC to pay for necessities, home repairs, maintaining/replacing vehicles needed to commute to work, and obtaining additional education or training to boost their employability and earning power.¹