What Do Tax Breaks for Millionaires Cost in Mississippi?

Today, the United States Senate will be voting on the “Buffett Rule.”   The “Buffett Rule” is the principle that the tax system should be reformed to reduce or eliminate situations in which millionaires (households earning $1 million or more annually) pay lower effective tax rates than many middle-income people.

Only around 210,000 taxpayers – a bit over 1 of every 1,000 – would face higher federal taxes if the measure were enacted, according to the Tax Policy Center.

The National Women’s Law Center shared information on how these tax breaks affect the Federal government as shown in the graphic below. 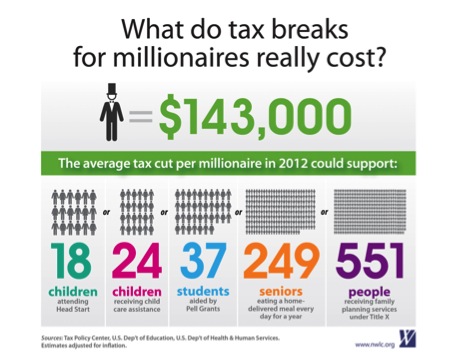 Here are two examples of how these issues play out in our state.

Taxes are important to all Mississippians, not just because they represent a portion of their paychecks, but also because they fund the public structures that provide the foundation for creating jobs and building a strong economy.  Our state’s tax system should be equitable and adequate, taxing all individuals based on their ability to pay and taxing our citizens in such a way that we are able to build and support the structures that we all depend on each day.