What should we do with our surplus? Reserves and one-time money not the only concerns for Mississippi’s financial health 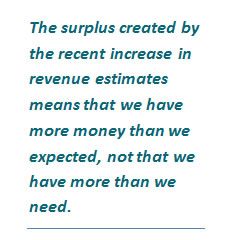 Do we really have a surplus in the state budget?  It depends on what you mean by surplus. The surplus created by the recent increase in revenue estimates means that we have more money than we expected, not that we have more than we need.

While revenues are finally rebounding, they are coming up from a deep trough that caused, among other things, teacher layoffs, reduced per pupil spending at grade schools and high schools, increased college tuition rates, and a dramatic shortage of state troopers.

The revenue surplus is due to understandably conservative revenue estimates that were far below actual revenue collections and spending that was kept largely at recessionary levels. Needs have grown, but state support for education, public safety, and other things that bolster our economy has just now gotten back up to 2008 levels. Furthermore, providing those services has gotten more expensive, so spending at 2008 levels actually gets us less than it did in 2008.

But instead of restoring our commitment to those services, Mississippi lawmakers have proposed using the revenue gains we have made to build large reserves so they can contemplate a future tax cut. As revenues have come in over projections, we have wisely begun to build up our reserves again. Those reserves helped us mitigate the devastating effects of the recession. However, they do not need to be filled all in one year while our schools, health, and public safety are hurting. 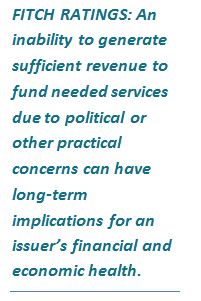 A prominent bond-rating firm, Fitch Ratings, which examines state credit worthiness much like consumers get a credit check when they borrow money, highlighted Mississippi’s use of one-time funds when it downgraded the state’s financial outlook from stable to negative last fall. One of the areas Fitch looks at when rating states is whether they have adequate revenue or too stringent spending limitations stating: “an inability to generate sufficient revenue to fund needed services due to political or other practical concerns can have long-term implications for an issuer’s financial and economic health.”

While it IS time to limit the state’s dependence on one-time money, we should do that in ways that don’t hurt our ability to have good schools, healthy communities, and safe roads—the very things our economy depends on in order to prosper.  These all require a healthy revenue system that generates enough resources to meet our state’s needs over the long term. In fact, Mississippi’s use of one-time funds was not the only thing Fitch raised concerns about.  It also cited Mississippi’s poverty, saying that “the state’s socio-economic profile is relatively weak, with wealth and educational attainment indicators that significantly lag national levels.” 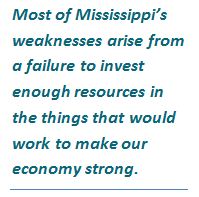 So, what does this mean for the future?

When Mississippi legislators made their budget recommendation for FY 2015 they proposed keeping $548 million unallocated for reserves, partly “for use in future years to provide tax relief to improve Mississippi’s competitiveness.”  That would take us in the wrong direction.

We can all agree that we want our state to be competitive and add jobs.  Tax cuts sound good, but they won’t accomplish those goals.  Most of Mississippi’s weaknesses arise from a failure to invest enough resources in the things that would work to make our economy strong.  What would really help us be economically competitive with other states? We need better schools, a college-educated workforce, and healthier communities.  If we give away the revenue gains we’ve made over the last couple of years, we’ll continue to hurt the very things that will build our economy.