In November, Governor Bryant, as required by law, released his budget recommendation for 2016. Bryant’s budget proposes a slight increase in spending over the current year. Despite slow economic recovery, state revenue for FY 2016 is projected to increase $166 million over current year revenue. 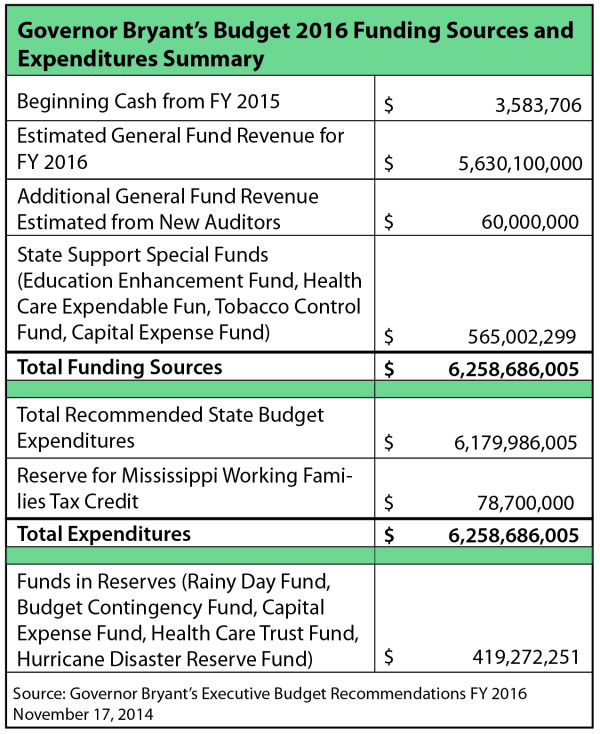 Bryant recommendations also include spending almost $6.2 billion on state services and $78.7 million for a tax credit targeted for low and moderate income working families (see analysis of the tax credit here). The Governor’s proposed budget leaves about $419 million in the state’s reserves

Governor Bryant’s recent budget recommendation includes a 1.67% total budget increase of roughly $102 million. While the budget includes provisions that would support working families (i.e. the Working Families Tax Credit, workforce training programs, and an increase in state financial aid), key areas such as education and healthcare continue to be underfunded.

The next table provides a snapshot of the amount of recommended funding for 2016 compared with 2015. Bryant’s budget recommendation includes a small increase for schools at $52.7 million—leaving a large gap between full funding and actual funding for next year and still below 2008’s pre-recession school funding levels. Public education programs that are not a part of the MAEP school funding formula would see a $3.2 million cut, this includes a 20% cut for the Educational Television Authority. 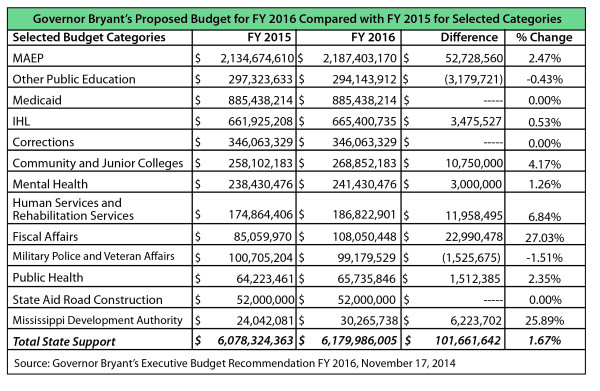 Despite the inclusion of items that will help working Mississippi families, like the Working Families Tax Credit, workforce training programs and increased funding for state financial aid, the continued underfunding and underinvestment of public schools and healthcare systems remain troublesome. It is important for the state to focus its efforts on investing in people and providing struggling families with the tools they need for future prosperity.