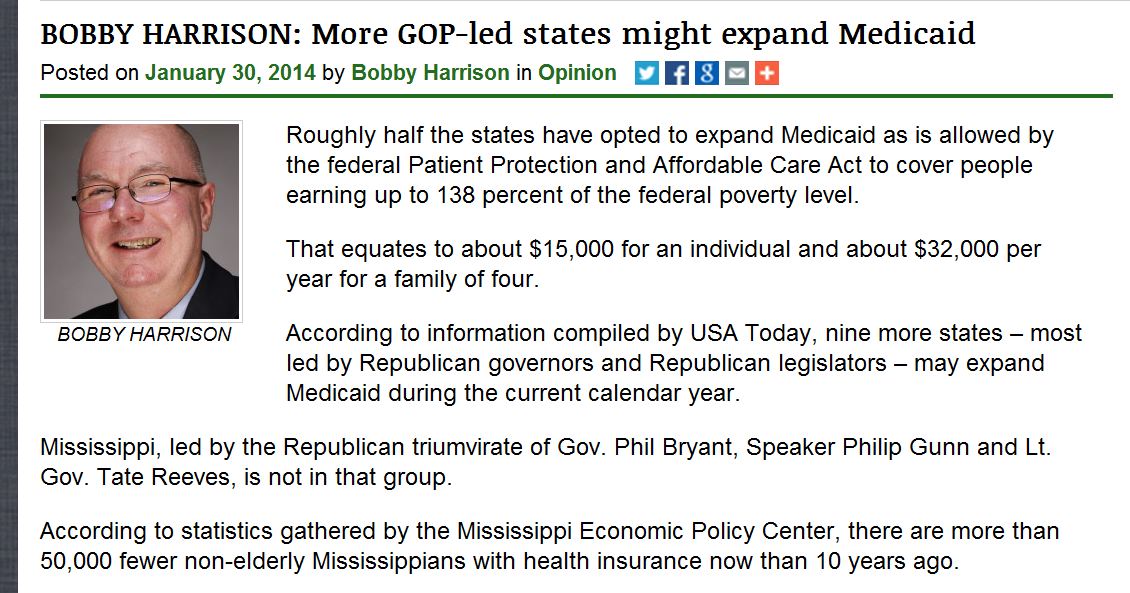 Roughly half the states have opted to expand Medicaid as is allowed by the federal Patient Protection and Affordable Care Act to cover people earning up to 138 percent of the federal poverty level.

According to information compiled by USA Today, nine more states – most led by Republican governors and Republican legislators – may expand Medicaid during the current calendar year.

Mississippi, led by the Republican triumvirate of Gov. Phil Bryant, Speaker Philip Gunn and Lt. Gov. Tate Reeves, is not in that group.

According to statistics gathered by the Mississippi Economic Policy Center, there are more than 50,000 fewer non-elderly Mississippians with health insurance now than 10 years ago.

And the Economic Policy Center said national research suggests that many of the jobs created in Mississippi in the coming decade will be the kind that do not provide health insurance. The fact that Bryant, Reeves and Gunn pushed through legislation to give millions in tax breaks for new malls is not doing much to reverse that trend. Studies indicate that as many as 300,000 (primarily people in low-wage jobs) could get coverage in Mississippi through the Medicaid expansion.

At any rate, Bryant, Reeves and Gunn stand with the Republican political leadership in Washington in wanting to repeal the Affordable Care Act. Apparently, they believe they can browbeat President Barack Obama into agreeing to repeal the legislation.

But in repealing the law at this point, they will be killing a program in which literally millions of Americans – some in Mississippi – are participating.

Mississippi has not expanded Medicaid, but there are people in the state who have obtained private health insurance through the exchange – many with pre-existing conditions who could not get coverage otherwise – and there are children remaining on their parents’ health insurance plan until age 26 because of the law.

In addition, by the time Republicans under any scenario are in position to repeal it, more than half the states will be participating. Already it appears that states with more than half of the nation’s population are in the Medicaid expansion group.

At this point, repeal will be difficult – maybe not impossible, but surely problematic for Republicans. Are they going to tell the people of California, Arkansas, Arizona or numerous other states they no longer have health insurance?

There is a good chance that after this year Mississippi will be in a distinct minority in terms of the states that do not cover primarily the working poor through the Medicaid expansion.

Of course, Mississippians are used to that position. We were one of the last states in 1969 to opt into the original Medicaid program that covers primarily the disabled, poor pregnant women, poor children and certain segments of the elderly. Interestingly, two of the state’s most powerful groups – the Mississippi Economic Council and the Mississippi Medical Association – will not weigh in on the issue.

The flip side for the MEC, Medical Association, the political triumvirate and others is whether the state can afford the additional costs. Some contend the state cannot. The federal government pays 100 percent of the costs of coverage for the first two years, starting this year, and it stair steps down to 90 percent by 2020. So there will be some additional costs to the state, though some studies have indicated that because of the new jobs and economic activity created that the expansion actually will be a net gain to the state general funds or the costs will be minimal.

And then there is the issue – articulated by many – of whether it is good public policy for people (working or not) to get health care through the government.

Those are decisions that the triumvirate already has debated and reached a conclusion. But increasingly the decision reached by Bryant, Reeves and Gunn is in the minority of states. Of course, we Mississippians are used to being in the minority.

And granted, sometimes the minority is right and everyone else is wrong. Time will tell about the triumvirate’s decision this time around.