In This Impoverished Mississippi Community, Teacher Assistance is a Coveted Job. 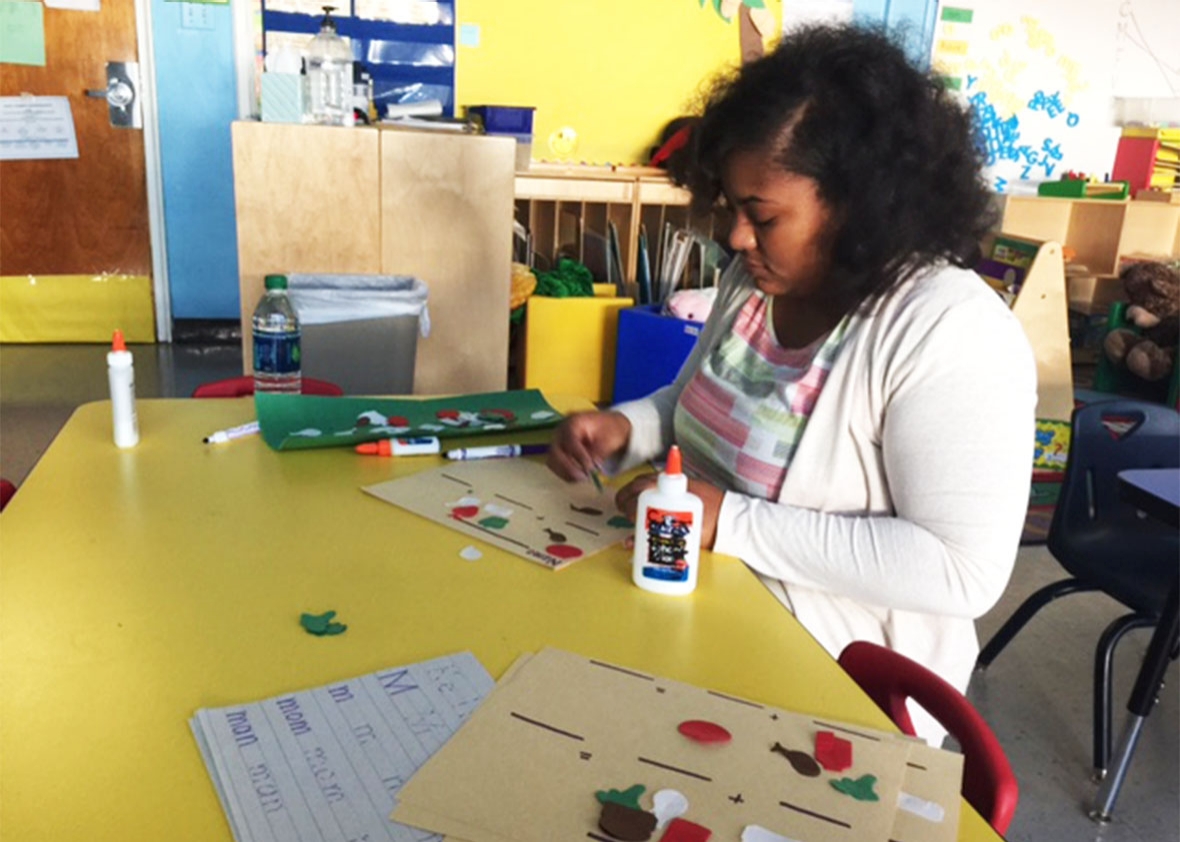 Jasmine Riley just under $21,000 a year as a teaching assistant in Greenville, Mississippi, but she has an enviable situation compared with many residents of the Delta.

GREENVILLE, Mississippi—Every weekday morning, Jasmine Riley, a single parent, drops her three children off at day care and school by 7:30 a.m. so she can start a long day as a teaching assistant at Greenville’s McBride Pre-K Academy. Many afternoons, she has only an hour and a half to spend with her kids. She supervises homework for her girls, a 6-year-old and a 4-year-old, while the 1-year-old baby plays. At around 5 p.m., after she’s laid out their pajamas, Riley’s mother or sister arrives, and Riley says good night. She then drives 45 minutes to attend classes at Mississippi Valley State University, where she’s studying business. Riley gets home at around 9:30 p.m., after the children have bathed and gone to bed. Early the next morning, she does it all over again.

Despite the long hours and low pay—she makes just under $21,000 a year—Riley has an enviable situation compared with many residents of the Mississippi Delta. She can pay most of her bills, works a family-friendly calendar, has health insurance, and might soon pull herself into the middle class—if her studying pays off and she can move from teaching assistant to teacher.

Throughout many parts of the Delta, teaching assistant jobs attract scores of candidates; a vacant position can draw upward of 75 applicants. The jobs provide one of the few ways many families can break free from generational poverty, says Tamalyn Williams, the principal of McBride Pre-K. Teaching assistants “feel like, ‘If I go into this, this is not just a job, this is a career, and I can start to break down some of the barriers that have kept my family down for so long.’ ” Williams says, “They’re proud of it. …. It’s a noble job.”

The stature a job that pays as little as $9.04 per hour has speaks depressingly to the severe economic degradation of large swaths of rural America, where limited public sector and fast-food jobs can be practically all that’s available. It also demonstrates the pivotal role that teaching continues to play as a path to the middle class, particularly for black women. But as the experiences of several Mississippi Delta teaching assistants show, that path can be winding, and those on it are by no means guaranteed to reach its terminus. In many instances, the middle class remains an elusive destination in these communities, even for those willing to work hard and pursue higher degrees.

The Mississippi Delta, in particular, offers few economic opportunities, especially for women of color with children. While the unemployment rate stands at 5 percent nationally, it’s nearly 10 percent in Washington County, where Riley lives. And while about 15 percent of Americans live in poverty, more than 30 percent of Washington County residents do. The major town of Washington County, Greenville, is on the banks of the Mississippi River, and is home to the historic sites like Nelson Street, a strip of former nightclubs where people flocked during the 1940s and 1950s to hear the jazz and blues for which the Delta became famous. Today almost all the students in the Greenville Public School District receive free and reduced lunch.

Job opportunities are as follows: health care, education, retail, restaurants, casinos, the Mars Food factory—or leaving town. The median household income in Washington County is $28,093—compared with a state median of $39,031 and a national median of $53,046.

Riley started at Greenville public schools four years ago. Before that, she worked at Pizza Hut, a job that she had held on and off since her senior year in high school, which paid $7.25 an hour, Mississippi’s minimum wage. Her children’s father covers some expenses, including day care, but even with that help Riley couldn’t meet her costs on her Pizza Hut salary alone. So for two years she worked as a teaching assistant during the day and Pizza Hut at night. Since quitting the Pizza Hut job two years ago, Riley makes do on exactly $20,948—more than $3,000 below the federal poverty line for a family of four but above the average teaching assistant pay in the region.

As hectic as her schedule is, Riley finally feels like she’s on an upward trajectory since replacing the Pizza Hut shifts with night classes. She has taken out two student loans of around $12,000 each and is in her final semester of a business degree, which she can use to be certified to teach. And in the meantime, at least she has Saturdays and Sundays off. She tries to do something fun with her children every weekend, like a movie night, because “they never see me during the week,” she says. On Saturday, Riley catches up on cleaning.

Apart from rising through the management ranks at a casino or a local business like a family law firm, education offers the best path to the middle class for many Delta residents. The schools need the teachers. Turnover rates are high, particularly among those who don’t come from the community. “By the time you really train them and get them good, it’s time for them to leave,” says Bernell J. Saffold, principal of SV Marshall Elementary in Lexington on the southern edge of the Delta. “Then you have to start all over again.” By contrast, teaching assistants are more likely to be locals with no intention of moving. “They will stay here and want to provide quality education for the communities and families that they grow up in,” says Saffold.

Administrators often encourage their assistants to go back to school. Tamalyn Williams wants all of her assistants to study to become teachers—a goal that she’s nearly achieved. Teaching assistants in Mississippi don’t need college degrees; the requirement is 48 hours of college or passing a state test. “I’m always saying to them, ‘Have you thought about going back to school? We really need people like you,’ ” Williams says. Many districts help assistants pay tuition fees.

Making the step into professional, middle-class life can be an enormous challenge in the Delta. The lack of affordable child care, for instance, makes it incredibly difficult for single mothers to train for a better paying job. The stubborn persistence of extreme poverty leads to “community devastation,” according to Corey Wiggins, the director of the Hope Policy Institute, a think tank aimed at reducing poverty in Mississippi. He argues for a greater investment in polices that help people progress out of low-wage jobs. If the government invested in high-quality, low-cost child care, for instance, it would allow many women, including many teacher assistants, to go back to school and move up the economic ladder.

As Riley’s experience shows, it takes an extraordinary amount of energy and drive for many assistants to get licensed as teachers. Riley is in her final semester of classes and is considering becoming a sixth-grade teacher. “It will be the starting of a career, something I could have, and be able to retire from,” she says. An entry-level teacher earns at least $34,390 in Mississippi.

For Riley, a teacher’s wage would likely allow her to move the family out of its apartment and into a house. Currently, “my income isn’t where it needs to be” to qualify for a home loan, she says.

Riley benefits from strong family support and personal ambition. It’s not so easy for single mothers who don’t have relatives to help with evening child care or someone to help with day care costs. She’s also supremely organized. She purchases her children’s Christmas gifts in June and often shops in bulk, according to one of her colleagues. “I’m learning budget tips from her,” the teacher says.

It takes some teaching assistants far longer than others to become teachers. Riley, who already has an associate’s degree, began studying two years ago and expects to graduate in May. Irene Scott, now a teacher at SV Marshall Elementary in Lexington, took eight years to finish her degree. “I explained to my kids, ‘You may see little of me. I may seem drained, but it’s going to pay off later. Just be patient with me,’ ” Scott says. She attributes her ability to balance family, work, and school to “divine intervention.” Becoming a teacher gave her an extra $400 a month. “I made a lot sacrifices. And I think it was worth it.”

Many teacher assistants never become teachers, despite years of trying. Some never complete the coursework while others can’t pass the certification tests required to teach in Mississippi. In Greenville, for example, no assistants have become certified this year. Superintendent Leeson Taylor estimates that just 30 percent of teaching assistants who try to become teachers make it through the whole process.

“The degree is not the barrier,” he writes. “The [certification] test is.” Even with quality child care and subsidized tuition easing some assistants’ paths, the effects of poverty can be inescapable; many attended subpar schools themselves as children.

One November morning, she coached struggling readers from the second grade at SV Marshall Elementary in Lexington. “OK, the word is luck,” she told the class. “I want you to change the ‘L’ to a ‘D’ and give me your new word.” With Harris’ gentle but firm coaxing the students went to the board, one by one, and wrote the answer in tiny handwriting.

Cynthia Harris has been a teaching assistant at SV Marshall Elementary in Lexington, Mississippi, since 1990. Photo by Miriam Hall

Harris has been a teaching assistant at the school since 1990, and she works exclusively with the children who need extra help. Her day begins at 7 a.m., when she supervises breakfast at the school. It ends just before 4 p.m., when she helps shepherd the students on to buses. She earns approximately $14,000 a year. On that wage, she must raise her son, Khylen, a 9-year old; pay the mortgage on a mobile home; and save for retirement. Harris calls herself a “homebody” and her personal costs are few. So she can make it work.

“I’ve been doing this so long it’s routine,” she says. “Bills come first—that’s all.”

Harris’ mother worked in a factory that manufactured picture frames and encouraged her to get a job in the schools. “She wouldn’t want me to be in a hot factory,” she says.

Harris is widely respected at work and earned her elementary education degree by studying in her spare time. But she’s never been able to pass the teacher certification exam, failing the math component by a few points three times in a row. She last took the test nine years ago. After that setback, she decided never to take it again. “She could carry on a classroom,” says Saffold, her principal. “If the certification were there, it would be no option, she would be in a classroom in a heartbeat.”

Even though it would make a huge difference in her life, Harris has resigned herself to never becoming a teacher. “The last time I took it, I said, ‘Forget it,’ ” she says. “My mom, she pushes me to become a teacher, but no, I’m fine, comfortable in the zone that I’m in now.”

She has high standards for her own children. A professional career is non-negotiable and she pushes and encourages her boys to excel. Her elder son has a master’s degree and has moved away. Harris says he won’t come back to the Delta to live. “He has goals, he has big dreams. He wants to own his own company,” Harris says. “I once had those goals. I fell short.”

For Harris’ family, the path to the middle class will, by necessity, take them far from the Delta. And far from home.