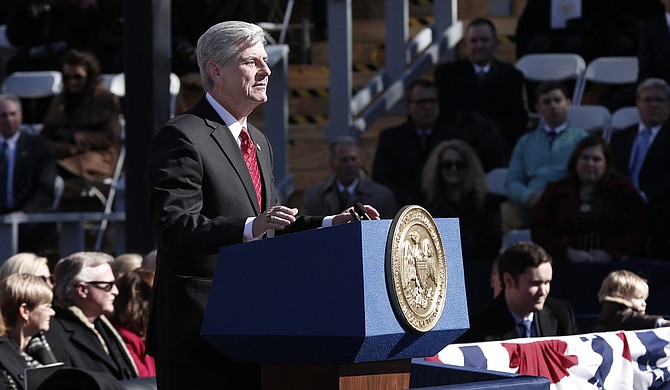 Gov. Phil Bryant got the ball rolling on a 5.2-million-square-foot manufacturing facility for Hinds County last year. As the unveiling of the super-secretive project nears, officials expect local and state tax breaks to help the project. Photo by Imani Khayyam.

A hush-hush development in rural Hinds County will likely get a boost from local and Mississippi taxpayers.

Speaking at Koinonia Coffee House on Jan. 22, Pieter Teeuwissen, attorney for the Hinds County Board of Supervisors, said the proposed “megasite” is likely to draw tax incentives from state lawmakers, although he declined to offer specifics.

“If we land this megasite, it’ll be the most important thing to happen in this county in 20 years,” Teeuwissen said.

Gov. Phil Bryant’s office had to file documents with the U.S. Army Corps of Engineers because the site would affect more than 115 acres of wetlands. Those plans called for a 5.2-million-square-foot industrial building and operations space on 640 acres of what was 16th-section land in an unincorporated area of the county.

On Jan. 18, the Hinds County Board of Supervisors voted to rezone 264 acres to increase the buffer zone between the site of a yet-to-be-unveiled facility and homes.

State and economic-development officials say they signed non-disclosure agreements barring them from disclosing the names of companies looking at the site, which is being marketed around the world.

The only thing most people who know anything about the project will say is that it is similar in scale to Nissan’s Canton manufacturing facility—which is 1 million square feet smaller than the proposed Hinds County megasite, on Norrell Road—which suggests that the winning project is likely a facility to manufacture cars or automotive accessories.

The megasite is also akin to Nissan for another reason—because of the likelihood it will receive a handsome tax-break deal. Laura Hipp, a spokeswoman for Lt. Gov. Tate Reeves, said the lieutenant governor’s office does not comment on economic-development projects.

Messages to Philip Gunn, whose Clinton district is near the site of the proposed development, and Gov. Phil Bryant were not returned by press time.

Mississippi’s taxpayers have directly invested $377.8 million worth of incentives in Nissan’s 3.5-million-square-foot facility in Madison County. That sum includes $363 million paid up front to help Nissan with construction costs.

In 2011, the state gave Nissan another $7.3 million for infrastructure-related expenses to move the Frontier pickup and Xterra sport-utility models to Mississippi from Smyrna, Tenn. Then, in June 2012, state officials announced another major expansion for which the state would kick in another $7.5 million, growing the plant to 4.2 million square feet on 1,034 acres.

In 2013, the Legislature gave another $330 million in tax breaks to Yokohama Tires for a facility in West Point. The next year, Mississippi offered Cooper Tire & Rubber Co. $20 million over three years.

The deals have sometimes come under fire from budget watchdogs who say that Mississippi cannot afford to give away tax breaks to corporations.

Additionally, Wiggins said legislation that paves the way for new incentives should include a fiscal note that explains how the breaks will affect the state budget as well as a way for holding the companies accountable for the jobs they promise to create in order to get the incentives.

“Whatever metrics are in place, someone has to make sure those metrics are being met,” Wiggins said.

Teeuwissen said Hinds County officials learned from some of the mistakes of the Nissan project, which used eminent domain to take some of the land for the factory, in developing the megasite.

“We didn’t take land,” he said. “We rezoned without pissing off anybody.”

Plus, Teeuwissen said the megasite will come with 1,000 guaranteed jobs with an average salary of $40,000 per year—which he said has the potential to improve the quality of life throughout Hinds County, the state’s largest.

“That means folks who don’t have a decent education can still get a decent job,” Teeuwissen said.