Number of Mississippi Kids Without Insurance Has Dropped Dramatically Since 2000 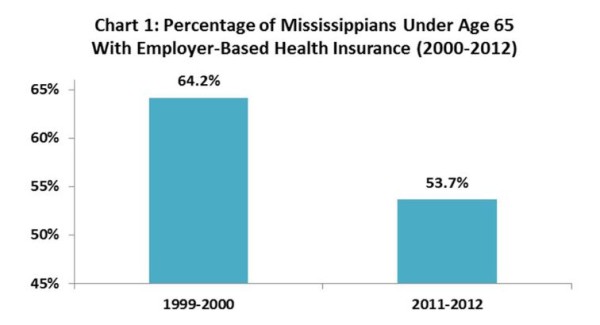 Jackson, Mississippi –    The number of children without health insurance in Mississippi fell dramatically between 2006 and 2012 from 117,619 to 68,472 according to Census Bureau data released today.  These gains were largely due to the success of the Children’s Health Insurance Program (CHIP), launched in 1998, along with Medicaid.

“Fewer and fewer employers offer insurance. Right now, when hard-working Mississippians lose their job-based coverage, most have nowhere else to turn,” said Jessica Shappley, policy analyst for the Mississippi Economic Policy Center.  “Thanks to the Affordable Care Act, that will change dramatically starting in 2014.”

Starting on October 1, Mississippians who can’t get affordable health insurance through their jobs and earn too much to qualify for Medicaid can sign up for coverage for 2014 through the new health insurance marketplace. Many people will be eligible for new federal subsidies to help them pay their premiums and reduce their out-of-pocket health costs.  An estimated 275,000 Mississippians are expected to become eligible for coverage through the marketplace.

However, Mississippi’s leaders have refused to accept federal funds to expand Medicaid to cover an additional 300,000 working Mississippians.  Most of these Mississippians — those with incomes too high for Medicaid today but too poor to qualify for Marketplace — won’t be able to afford insurance through the Marketplace and will be left out in the cold with no options.

“Rejecting federal funds to expand Medicaid not only would leave 300,000 Mississippians out in the cold with no way to get health insurance, but it would pass up the opportunity to strengthen our state economy and help keep our workers healthy and productive,” said Shappley.