HOPE is also one of three credit unions invited to serve on the Small Business Advisory Review Panel in 2015 to provide insights into the development of the 2017 Final Rule. In both written and oral comments, we underscored the importance of underwriting and performance reporting on all proposed covered loans and supported the proposed restrictions on loan sequencing for short-term covered loans. In the absence of a strong Ability-to-Repay rule, we concluded, the credit union and its member owners would incur costs.  We were disappointed in the determination by the Bureau that no SBREFA was needed for such a sweeping change of course. We disagree with this assessment and continue to stand by our original analysis, which is updated in these comments.

Of most concern, however, the CFPB is proposing to eliminate some of the most significant consumer protections of this modest rule – which has never had an opportunity to be implemented and evaluated.  As a result, the Bureau cannot know and cannot compare the impact its underwriting provisions will provide to consumers in terms of relief from abusive lending schemes versus any perceived cost of underwriting outlined in the ANPR. Additionally, several assumptions outlined in the ANPR to justify the rescission of the 2017 Final Rule, are inconsistent with our experience as a National Credit Union Administration designated Low-Income and Minority Depository and are outlined below.

A.2. Data and Evidence

HOPE disagrees with the conclusion of the Bureau that the evidence cited in the 2017 Final Rule analysis “is insufficient to support the findings that are necessary to conclude that the identified practices were unfair and abusive.”

In 2015, HOPE provided comments in its capacity as a SBREFA panelist for the 2017 Final Rule with the Bureau.  In our comments, we profiled the real-life experience of a HOPE member in Mississippi.  At the time, there was no state law requiring lenders to determine a borrower’s ability to repay. The borrower had initially taken out a payday loan to cover expenses to repair the borrower’s car.   Once the borrower had taken the first loan, the loan repayment terms caused another financial shortfall for the borrower.  The borrower got behind and then took out another loan and then another. By the time the borrower came to HOPE, the borrower had eight payday loans outstanding from seven different lenders in amounts exceeding the borrower’s take home pay.  Table 1 provides an overview of the loan amounts. 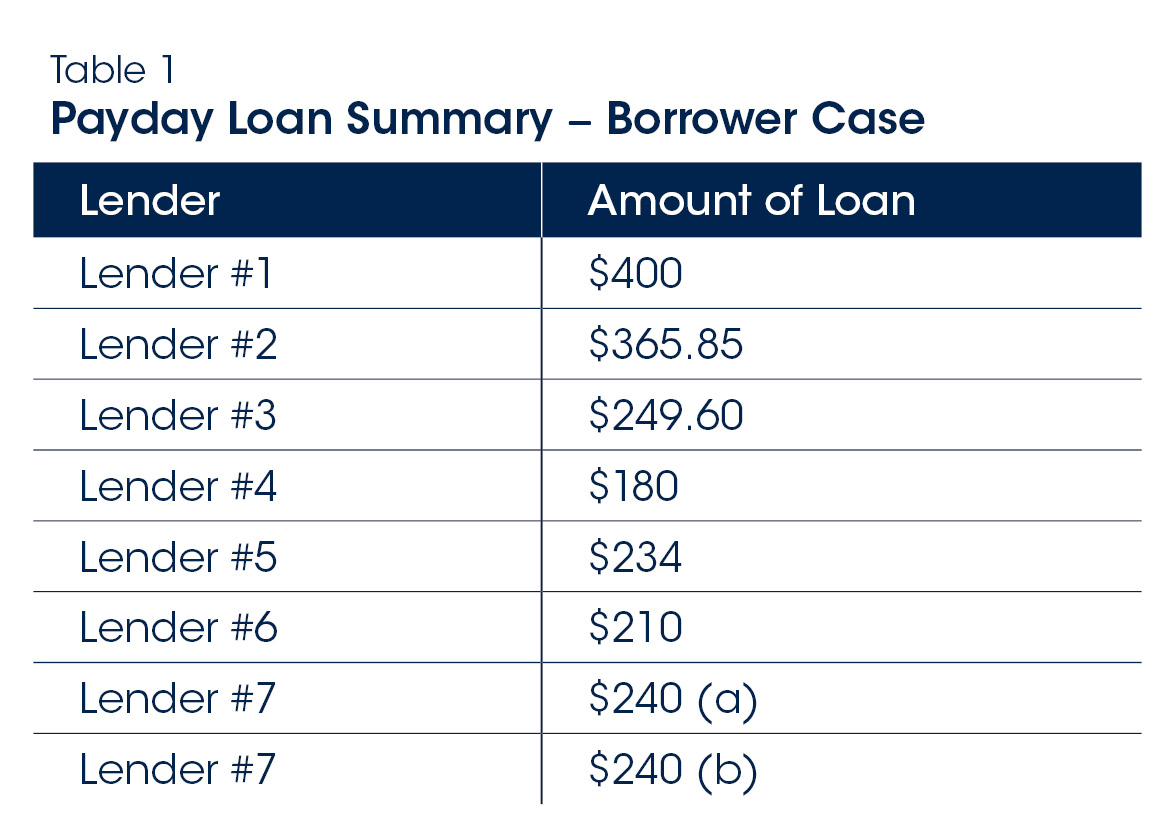 Because the Borrower could not afford the original $400 loan, and because subsequent lenders did not consider the borrower’s ability to repay, the member continued a pattern of borrowing, growing deeper in debt.  This practice, called loan stacking, remains one of the most abusive aspects of payday lending – in this instance actually making loans beyond one’s monthly income.

Unfortunately, the borrower case study outlined above is common.  In 2016, another member approached HOPE for assistance.  The member had two outstanding payday loans of $500 each from two different lenders and a third cash for title loan with a payment of $780 required to extend a loan.  The debt to income ratio for this borrower was 57% – a ratio well beyond any responsible underwriting guidelines. HOPE made a consumer loan to pay off all of the high cost debt and an outstanding medical judgement, which dropped the debt to income ratio to 21%.

In 2018, another member, a city employee, had lost their job and found employment with a lower salary. In the process of managing their finances, the member took out two installment loans and two payday loans, which the member was unable to pay off. An analysis of the debt-to-income ratio for the borrower showed a ratio of 55%.  After working with HOPE, the member was able to pay off the high cost debt and the debt-to-income ratio was reduced to 36%.

The examples cited above, year after year, illustrate the abusive practice of loan stacking. In the stacking of loans, lenders are given access to a consumer’s checking account to ensure payment of loans when funds are most likely to be on deposit – regardless of whether or not he or she has the ability to repay the loan. Furthermore, in our conversations with members, it is clear that members who found themselves stuck in a high cost loan stack did not anticipate the economic harm they would incur until after the loans were originated and payments became due. As a result, HOPE finds itself regularly in a position where it must remedy the harm created by this abusive and unfair practice through its consumer loan program. Given the costs borne by consumers caught in the practice of loan stacking, a strong case exists against the revocation of the 2017 Final Rule.

B.2.C. New Evidence on the Benefits and Costs to Consumers of Access to Payday and Other Covered Short-Term and Longer-Term Balloon-Payment Loans

One of the studies cited in this section references analysis of small dollar installment loans in Arkansas and the effects of the state’s cap on interest rates on the demand for the product. While the study suggests, “the demand for credit is not eliminated by restrictions on the supply of that credit” a descriptive, regional analysis at least raises questions about the demand for high cost alternative financial services in an environment where strong consumer protections are in place. Table 1 provides an overview of underbanked household rates among the Deep South States relative to state-level poverty rates.

Notably, Arkansas has the lowest rate of underbanked households, households that have a bank account and that use the services of one or more high cost financial service providers including payday lenders.  Arkansas is also a state where HOPE operates three branches.  The rate is at least two percentage points lower than all of the other Deep South States and Arkansas is the only state with constitutional limitations on interest rates.[1] The low regional rate for Arkansas persists even in the presence of high poverty rates. While the measure of underbanked households is not limited solely to payday lending, one can infer that the cap may have played a role in moving people away from the high-cost payday loan product.

D.1. & D.2. Potential Benefits and Costs of the Proposal to Consumers and Covered Persons – Requirements Related to Information Furnishing and Registered Information Systems

In sections D.1 and D.2, which outline the costs and benefits associated with the revocation of the 2017 Final Rule’s provision to require reporting of covered loans to a Registered Information System (RIS), we disagree strongly with the Bureau’s assertion that “the proposed elimination of the RIS-related requirements would have minimal impact on consumers.” In our experience, a documented history of loan repayment is the single most important factor affecting the price of credit for our members.

A review of HOPE’s Credit Migration Analysis in June of 2018, showed 32% of HOPE’s borrowers with an outstanding consumer loan experienced an upgrade of one letter grade over three quarters.  Letter grades are based on member credit scores.  Only 13% experienced a decline.  As member credit scores increase and members experience an associated increase in letter grades, the cost of credit decreases. As mentioned in our SEBREFA Comments in 2015, HOPE relies on a credit score to price a loan, not to render a decision on whether or not credit would be granted. Additionally, as a member owned cooperative, HOPE provides its members with the opportunity to refinance loans as credit score improvement occurs.

While the Registered Information Systems do not report to the Credit Bureaus, they do offer an additional set of information for lenders to make loan decisions. HOPE planned to take advantage of the RIS to increase access to its lending programs. As access to HOPE’s lending programs increase, credit building occurs and the cost of credit decreases for future members. In our opinion, the Bureau grossly underestimated the positive benefits associated with reporting requirements on the overall access to and price of credit for consumers currently engaged with the short-term small dollar loan market – once again making a strong case against the rescission of the 2017 Final Rule.

HOPE disagrees strongly with the Bureau’s assessment that the proposed recession of the 2017 Final Rule “would not have a significant impact on a substantial number of small entities.” As member owned cooperatives, each time members are harmed through abusive and unfair lending practices, our businesses are harmed directly. Credit unions pass on profits to members in the form of higher rates on savings accounts and lower rates on loans to our member owners.  However, when abusive and unfair practices limit the economic success of our members, the credit union is less able to benefit its owners.  When members find themselves stuck in a loan stack and unable repay a loan, the cost is borne by our owners. When a member has his or her checking account closed down because a payday loan draft contributed to the negative balance on an account, the cost is borne by our owners. When short-term small dollar loans do not report to any system leading to the decreased access to and the building of credit, the cost is borne by our owners. Importantly, these costs are not just incurred by HOPE, they are incurred by every community development credit union missioned to serve low-income and low-wealth people and places – the vast majority of which are small.  As a result, we find ourselves deeply troubled by the hasty conclusion of the Bureau that small entities would not face economic harm. A SBREFA hearing should have been conducted before proceeding with this proposal.

Finally, we would be remiss is we did not place this issue squarely in center of the debate for economic justice and civil rights. Mississippi and Louisiana have the largest share of black residents in the country. Alabama, Tennessee and Arkansas also have rates that exceed the rate for the United States. Yet, 5 out of 10 black households in Arkansas and Tennessee, 4 out of 10 black households in Mississippi and 3 out of 10 in Louisiana an Alabama are classified as asset poor by Prosperity Now.[2] The proposal to rescind the 2017 Final Rule perpetuates an inequitable economic system that will continue to extract wealth disproportionately from households of color.  As the former Chair of the CFPB Advisory Board, I believe we can do better. We call on the Bureau to halt this misguided process and allow the 2017 Final Rule, a rule informed by over 1 million comments and five years of hearings and research to proceed.

Thank you for the opportunity to share our perspective on the proposed rule changes.  As next steps are considered, we encourage the Bureau to honor the spirit of the Bureau’s creation to make markets work for consumers and responsible providers.

[2] Prosperity Now defines Asset Poverty as the “Percentage of households without sufficient net worth to subsist at the poverty level for three months in the absence of income.”