Please find below the comments of the Hope Enterprise Corporation / Hope Credit Union (HOPE) in response to the OCC Notice of Proposed Rulemaking, Permissible Interest on Loans That Are Sold, Assigned, or Otherwise Transferred, Docket ID OCC-2019-0027.

HOPE is a credit union, community development financial institution and policy institute that provides affordable financial services; leverages private, public and philanthropic resources; and engages in policy analysis to fulfill its mission of strengthening communities, building assets, and improving lives in economically distressed areas throughout Alabama, Arkansas, Louisiana, Mississippi and Tennessee. Over the last 25 years, HOPE has generated over $2 billion in financing that has benefited more than one million individuals.

We are concerned that the OCC proposals will add to, rather than relieve, the burdens of highcost lending in our region by enabling more lenders to engage in such activity. In four of the five states in our footprint, high-cost lenders, such as payday and car title lenders, are already saturating our communities. For example, in 2017 in Tennessee, there were over 1,200 payday loan storefronts, more than McDonald’s and Walmart locations combined.1 In terms of fees drained by payday and car title lenders, Mississippi, Alabama, Louisiana, and Tennessee are in the top ten states, and high-cost lenders drain more than $1.6 billion every year from low-income borrowers in these four states.2

In these same states there are at least two high-cost lenders making these loans via the bank partnership arrangement. (Table 1) The OCC proposal increases the risks that more high-cost lenders will extract additional fees, aided by the willing assistance of partnering banks. 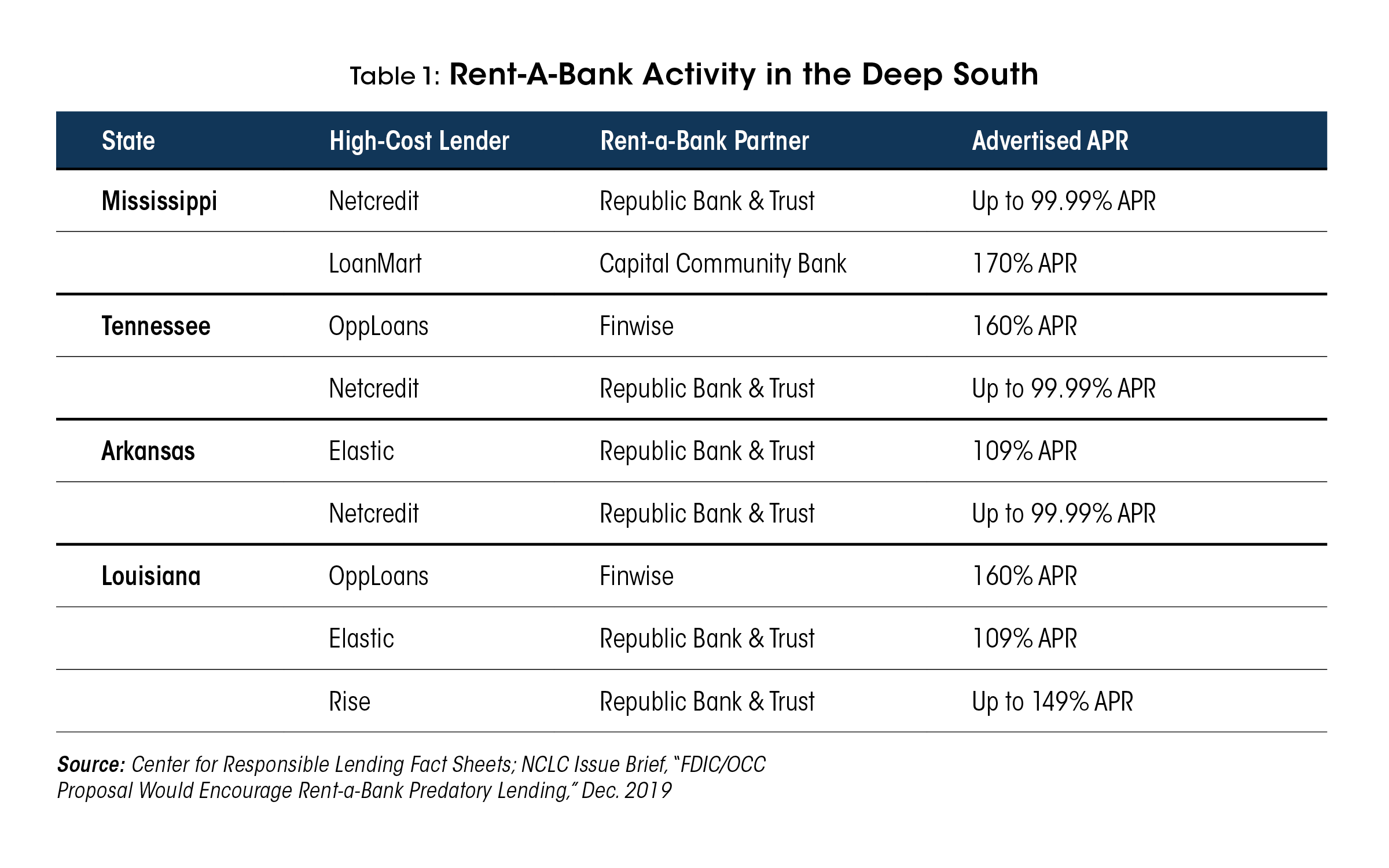 We recognize that to date, these arrangements involve only FDIC-supervised banks. However, the OCC proposals may open the door for national banks to enter such partnerships as well.3

The OCC proposal will put at risk the consumer protections that currently exist in our region, particularly the 17% constitutional rate cap in Arkansas.4 The proposals encourage lenders to circumvent this rate cap which saves Arkansans $139 million a year in fees that would otherwise be drained by high-cost lenders.5 The benefits of Arkansas’s law are documented in a recent report about how borrowers are faring several years after the enforcement of the rate cap.6  As one person said, they are doing “[m]uch better financially. You don’t continue to repeat the vicious cycle.”7

Beyond Arkansas, other state law protections in our region are at risk, such as but not limited to, Louisiana’s rate cap for consumer installment loans.8 In recent years, payday lenders and high-cost lenders have made attempts to move legislation that would undue these caps in Arkansas and Louisiana, but thankfully, these efforts have failed to gather the support needed by the respective state legislatures to come to fruition. The OCC must not override the policy decisions of the states as it is doing with this proposal.

HOPE’s concerns about the harms of these loans are not hypothetical. HOPE members have been trapped by loans facilitated by rent-a-bank partnerships, putting their economic success in jeopardy and thus frustrating our mission to build wealth among low-income communities and communities of color in the Deep South. We hear first-hand from our members and people in the communities where our branches are located about the troubles caused by unaffordable high-cost loans, such as multiple outstanding loans at once, difficulty paying other bills, and the subsequent inability to build wealth in the future. People are not being harmed by the absence of the loans supported by the OCC proposal. However, if promulgated by this rule, the presence of another high-cost loan product in a region where high-cost lenders are already in abundance will further exacerbate the financial strain of low-income borrowers.

Research shows that high-cost loans, even when structured with longer-terms and over installments, can have devastating effects on people’s financial situation. Such harms are in part why the U.S. Department of Defense extended its 36% rate cap to cover high-cost installment loans, in addition to the short-term loans that were previously covered.9 Empirical data from states with high-cost installment loans similar to those being made in our region through these rent-a-bank partnerships still show troubling patterns of repeat reborrowing and other burdens like difficulty meeting other obligations.10

These devastating financial consequences would be troubling for anyone, but they are particularly pronounced in the Deep South, where economic inequality is deeply entrenched and persistent poverty is prevalent. The five states of our region all have higher rates of unbanked and underbanked populations than the national average.11 The high-cost loans that will occur through the OCC proposal will only serve to increase these rates as people are exposed to practices that ultimately damage their financial standing.

In light of these concerns, HOPE urges the OCC to withdraw its proposal.