Starting September 20th, the Joint Legislative Budget Committee will begin their annual budget hearings when agencies present and answer questions about their budget requests for the next year. The hearings are open to the public, and you can find the schedule here.

Every year Joint Legislative Budget Committee members have to make tough decisions, as the needs brought to light in the budget hearings are always greater than the funds available. However, recent years have been even tougher due to the recession, and Fiscal Year (FY) 2012 is projected to be the leanest year yet with federal stimulus funds ending.

The state has struggled to fund existing state services even with the aid from stimulus funds. Most stimulus funds will end in FY 2011 creating a state budget “cliff, ” as aid funds end before state revenue is projected to recover from the recession. The figure below shows actual and projected state funding levels from FY 2008 to FY 2012. 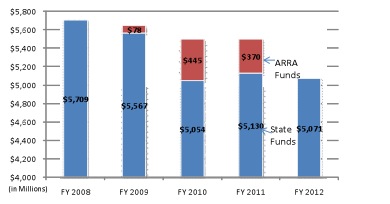 While no public data have been released on the size of the “cliff,” some budget makers cite figures ranging from $600 million to $1 billion depending on assumptions made about full funding of the Mississippi Adequate Education Program, the rolling forward of the extended FMAP and Education Jobs Funds and the use of Rainy Day Funds.

State agencies have already dealt with successive rounds of budget cuts while at the same time dealing with greater needs for state services.  For the state to be competitive as prosperity returns, Mississippi needs to take a balanced approach to the budget crisis that includes raising revenues.

During the course of the week, check back with the blog as MEPC plans to post information gleaned from the budget hearings.