Community Development Financial Institutions (CDFIs) have been critical for deployment of Pandemic relief to small businesses in the Deep South, accounting for one-third of the Paycheck Protection Program (PPP) loans under $150,000 in Mississippi and Louisiana, making 7 times more small PPP loans in these states than the five largest banks in the country combined.

Congress enacted the Small Business Administrations’ PPP to provide a lifeline of support to businesses at the outset of the COVID pandemic.  As is now well-documented, PPP loans, particularly during the first round of $349 billion, favored larger businesses and those with established banking relationships, largely by passing small and minority-owned businesses.[1]  A critical improvement during the second round of funding was setting aside $10 billion in PPP loans to be deployed by community-based lenders, such as CDFIs.[2]  CDFIs have a long-track record of serving small businesses, particularly those historically underserved by other lending institutions.

To understand further the role of CDFIs in reaching small businesses in the Deep South, HOPE analyzed PPP loans under $150,000 in Mississippi and Louisiana, examining the amount of these loans by CDFIs compared to large national lenders.[3] Since the size of PPP loans is based on a company’s number of employees, loans under $150,000 is a reasonable proxy for a small business.  Notably, Mississippi and Louisiana represent the states with the two largest Black populations in the country, and are the two states with HOPE’s largest PPP lending volume.

The findings of our analysis underscore the vital role played by CDFIs with regard to supporting small businesses in our region:

PPP Loans Under $150,000 Made in Mississippi and Louisiana by Type of Lender 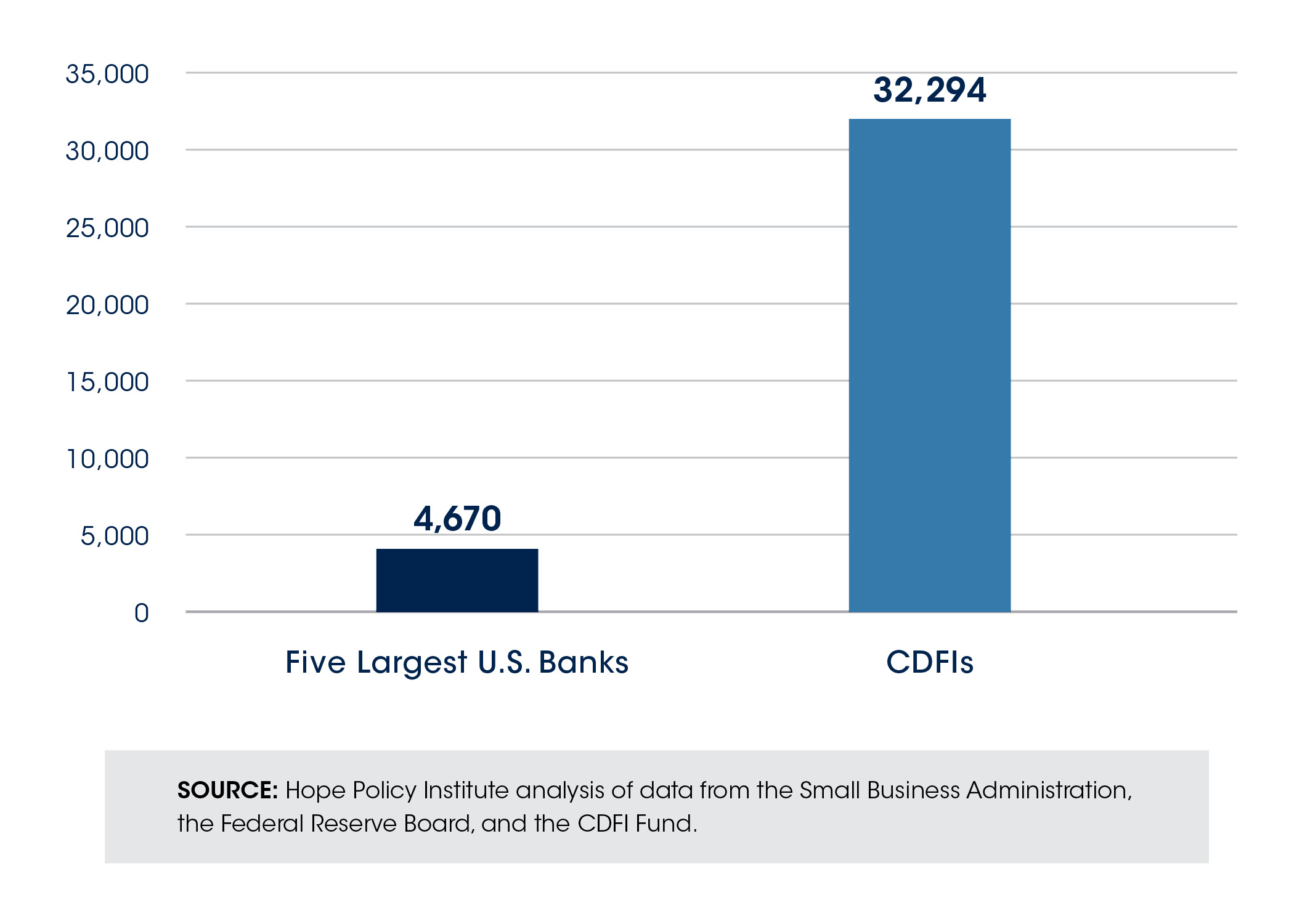 This deep CDFI outreach and service to small businesses during the pandemic were only made possible through their pre-existing experience in serving these businesses.  These numbers, particularly the relatively small number of loans made by national banks, reflect two elements of an already well-known reality.  One, many parts of the Deep South are considered banking deserts, where there is little to no access to traditional lenders, very few national bank branches, and the highest levels of unbanked households in the country. Mississippi and Louisiana have the two highest unbanked rates in the country, both at about 15%, over twice as high as the national average.[4]  For Black households, in both states, nearly one-third are unbanked. [5]

Given that the PPP program design favored well-resourced larger banks and their customers on a first-come, first serve basis, this means that many small businesses in our region could not even get in the door before hundreds of billions of dollars of relief aid was deployed.  Second, the numbers confirm the experiences HOPE and many CDFIs heard from small business owners throughout the PPP process: they simply could not get the help they needed from other banks.  For example, one HOPE PPP borrower said, “Every bank we do business with was saying that they were too busy and to find another bank. Hope was ready to help,” and another shared, that HOPE was “more helpful than the bank I was with for 15 years.”

These findings highlight the critical role that CDFIs play as financial first responders, not only during COVID but on a daily basis in communities experiencing economic distress.   As Congress considers the next federal relief package to support the nation’s economic recovery, these data reaffirm how indispensable CDFIs are to solving the critical needs of small businesses and preserving the jobs supported by them.

[1] See e.g., Center for Responsible Lending, “The Paycheck Protection Program Continues to be Disadvantageous to Smaller Businesses, Especially Businesses Owned by People of Color and the Self-Employed”. April 6, 2020. https://www.responsiblelending.org/sites/default/files/nodes/files/research-publication/crl-cares-act2-smallbusiness-apr2020.pdf?mod=article_inline.

[3] For this analysis, we cross-referenced the SBA PPP data for loans under $150,000, released on December 1, 2020, with the U.S. Treasury CDFI Fund list of certified CDFIs as of November 16, 2020.  The SBA PPP data is available here: https://sba.app.box.com/s/5myd1nxutoq8wxecx2562baruz774si6/folder/127201759675.  The list of certified CDFIs is available here: https://www.cdfifund.gov/programs-training/certification/cdfi/Pages/default.aspx