From the 2011 Policy Link Equity Summit: Equity is the Superior Growth Model

Last week, I attended the Policy Link Equity Summit and came home both with some of our approaches affirmed and some new thought provoking concepts.  In August, I blogged about some of the changing demographics in Mississippi and lifted up the evolution that there are now more children of color in Mississippi than there are white children.  At the same, time, the two sets of children start life from two very different starting places when one considers child poverty rates by race.

Another interesting way to analyze the shifting demographics that were shared at the conference includes looking at generational differences by race.  The chart below illustrates the generation gap among the races in Mississippi. 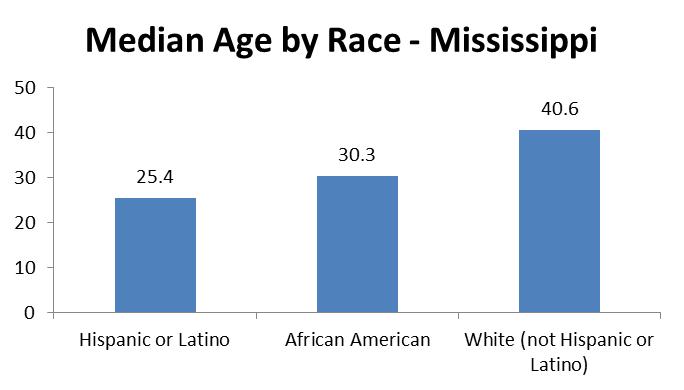 In a report released at the conference, “America’s Tomorrow: Equity is the Superior Growth Model,” the authors state that “today’s elders and decision makers do not see themselves reflected in the faces of the next generation.”  One result of the demographic shift is less investment in things like infrastructure and education.  In fact, a state by state comparison revealed that states with the largest generation gap by race have the lowest per pupil public school expenditures.

The chart illustrates Mississippi’s racial generation gap.  As new elected leadership moves into office, it is imperative that we all work together to create an environment that debunks the findings of the report.  Mississippi has the opportunity to demonstrate to the nation that there is another way.  To do so, we will need to work together to make and preserve investments in early childhood education, in K-12 education, in the community colleges, in our four year universities, in our health care system and in our roads and bridges.

Regardless of color, Mississippi’s future, our future, hinges on our ability and willingness to give all of Mississippi’s children the advantage of investments in the public structures that lead to advancement, opportunity and growth.