Today, the United States Census Bureau released the first of two rounds of data on the poverty rate, median incomes, and health insurance. In Mississippi, the data revealed a sobering snapshot of working families over the last ten years. 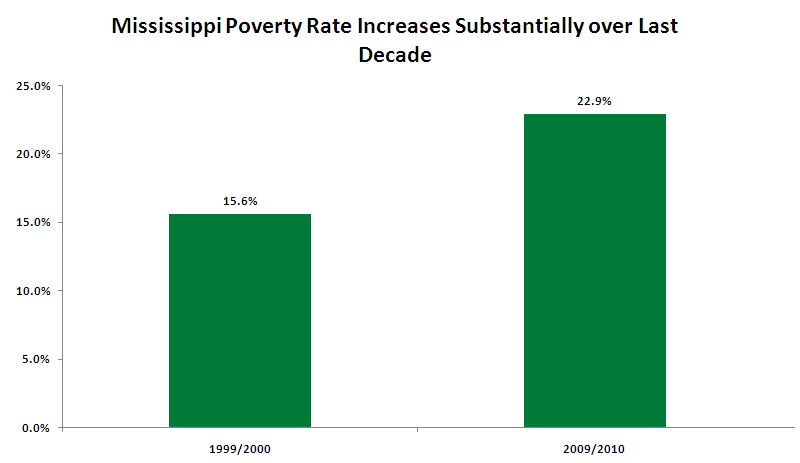 Incomes also declined substantially. Adjusting for inflation, median incomes declined $6,142, from $42,963 in 1999-2000 to $36,821 at the end of the decade. The data reflect the harsh effects of the recession on Mississippians.

As we prepare for the Joint Legislative Budget Committee hearings next week, we could receive information that Mississippi’s economy is slowing and that revenue projections could be similar or lower than last year. Over the past few years, similar news has elicited a cuts-only response.

The poverty and income data, however, raise questions about the wisdom of this approach. Should we underfund K-12 education for the fifth year in a row? Should we continue to make college or post-secondary training less attainable by putting the community colleges and Institutions of Higher Learning in the position to have to raise tuitions? Should we make it harder for families to make ends meet by reducing access to health care?

Mississippi can do better. Now, more than ever, the state must take a balanced approach that includes raising revenues instead of the cuts-only approach that fails to preserve education, access to health, and, ultimately, opportunity.