•  Healthcare costs for consumers are rising faster than the costs for insurers
The national study found that consumers’ out-of-pocket expenses increased 7% from 2009 to 2010.  For insurers, costs only rose 2.6% during that time period.

•  Prices are Driving Health Spending Growth
The report suggests that prices, not the amount or intensity of services, are the driving force behind the trend in healthcare expenditures.  “Facility Prices” provide one set of examples (See Figure 1, below).  A facility price is the price charged by a hospital facility for each service rendered.  The average facility price for an emergency room visit grew 11% from 2009 to 2010  while average inpatient surgical admission prices increased by 6.4%(from over $25,000 in 2009 to over 27,000 in 2010). 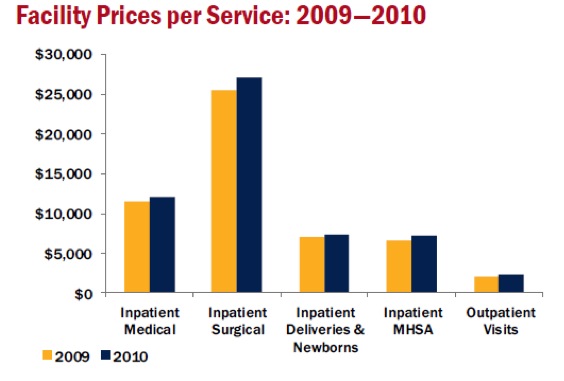 What This Means for Mississippi

Healthcare is a benefit that every Mississippian needs—especially for their children.  Through no fault of their own, many of the youngest and most vulnerable members of society lack coverage for the health services they need to develop into healthy, productive adults.  Given the trend in rising healthcare costs nationally, without policy interventions, it may be much harder for working Mississippians to afford these services.