This week, The Center on Budget and Policy Priorities released a report entitled, New School Year Brings More Cuts in State Funding for Schools.  The report explores the continuing effects of budget cuts on state-funded services, like education, taking place across the nation.  One of the major findings in the report addressed the consequences these cuts have for local school districts.

State-level Cuts To K-12 Education Have Major Consequences For Our Local School Districts:
Cuts at the state level mean that local school districts have to scale back on services they provide, raise more local tax revenue to cover the gap, or both.

These cuts also have serious consequences for our state’s economy.  In essence, cuts to education:

As a result of these consequences, consumer demand is removed from the economy (workers have reduced purchasing power due to job loss/reduced salary), which then discourages businesses from making new investments and hiring more employees.

What These Cuts Look Like In Mississippi
Public education spending has stayed fairly constant as a share of the state’s economy (see Figure 1, below); However, since 2010, public education as a share of the state’s economy has experienced a 0.5% decline and is at its lowest level since 1999.  Furthermore, as the report points out, Mississippi’s spending per student has decreased by 12.9% since 2008.  In dollar amounts, this means that Mississippi is spending $628 less per pupil than was spent in 2008. 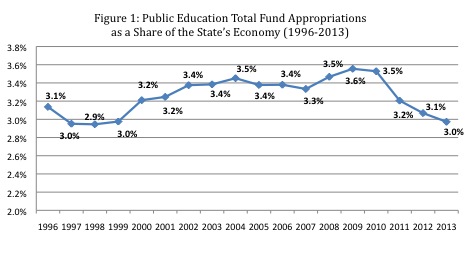 Be Careful What You Cut
Mississippi is not as affluent as other states, but there are still options our state can use to increase our ability to invest in programs such as education.  Without a balanced budgeting approach that includes raising revenues; Mississippi will be less competitive when prosperity returns. The current cuts only approach undermines the investments we can place in our schools and our children—the future of Mississippi.