Scorecard: Mississippi has Highest Rates of Unbanked and Underbanked 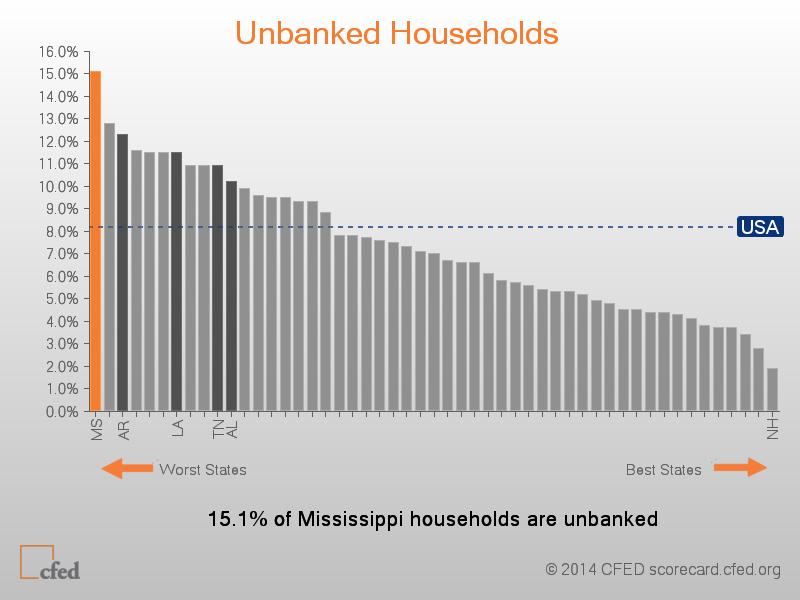 People with an account at a bank or credit union are better positioned to participate in the economy and contribute to the nation’s recovery. As such, a relationship with a financial institution enables people to more securely plan for future investments as they work their way toward financial stability. Banks and credit unions allow people to save, plan for the future, build credit and climb the economic ladder. However, a large number of American households do not have access to basic financial tools like checking and savings accounts. According to the 2014 Assets & Opportunity Scorecard, which takes a comprehensive look at Americans’ financial security, more than one in four households (28.3 percent) are either unbanked or underbanked. The unbanked and underbanked are more likely to depend on costly alternative financial services, like payday loan providers—services that deplete rather than preserve income and wealth.

Unbanked Households – Households with neither a checking nor savings account.

Underbanked Households – Households that have an account but continue to depend on costly alternative financial services for basic transactions and credit needs, like check cashers, payday loan providers, pawn shops, auto title lenders and rent-to-own stores. These businesses charge high fees for their services and deplete rather than preserve income and wealth.

Mississippi has 269,000 underbanked households (23.6 percent). Compared to the rest of the nation, Arkansas and Louisiana have the third and fourth highest rate of underbanked residents in the country. In the U.S., approximately 24 million households (20.1 percent) are underbanked.

Unbanked and underbanked households typically operate in a cash-based system, and, as a result, do not have access to the same financial security and opportunities as those who bank with traditional financial institutions. The unbanked and underbanked are more likely to spend a percentage of their net income on unnecessary fees as well. Without a safe place to store their money, they are also more likely to be victims of crime and unable to safely access money during emergencies.

The data underscore the importance of implementing policies that promote financial inclusion. When households are attached to the financial mainstream, they have the tools available to save and build wealth, as well as the opportunity to pass good savings behavior onto children.

Interestingly, the states with the highest rates of unbanked populations are those states with large minority populations. Considering the shifting demographics of the country, pursuing policies that connect households of color to the financial mainstream remains essential to maximizing opportunity in America. Examples of such policies include expanding support for Community Development Financial Institutions (CDFIs) and Community Development Credit Unions (CDCUs) that continually work to meet the needs of historically underserved populations.

February 24 – March 1, 2014 is America Saves Week – a national campaign that aims to promote good savings behavior and provide a chance for individuals to assess their own savings status. For more information on the week, including how to create and commit to a basic savings plan, follow @HopeCreditUnion and @MEPConline on Facebook and Twitter.