Supreme Court Maintains ACA and the Health Insurance Mandate: What this Means for Mississippi

This decision preserves the Child Health Insurance Program (CHIP), keeps Medicaid and CHIP coverage for children who are currently enrolled, and affirms a long list of consumer protections that will ensure that individuals with long-term or serious illnesses are able to get the care that they need.¹

While the Court upheld the law in its entirety, it ruled that the Medicaid coverage expansion would not be required for states.  This could complicate the ACA’s goal to improve coverage for low-income adults, including parents, and overlook the rising trend in healthcare needs in our state.  Consider these facts: 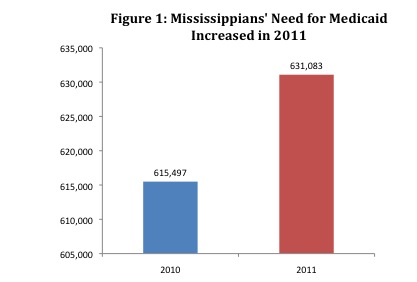 Even without the ACA’s reforms, the rising costs of healthcare and increasing need for healthcare coverage in Mississippi will not go away.  If our leaders decide against providing coverage the poorest adults — primarily low wage working families — will be left out.

Moreover, if Mississippi’s leaders refuse to implement an expansion of Medicaid, Mississippians with incomes between 100% and 400% of the federal poverty line will be eligible for subsidies to help them afford coverage in the new health insurance exchanges, but people below the poverty line will not be eligible because the ACA assumes they will receive Medicaid instead.◊

Below is a statement from MEPC Director Ed Sivak with another look at what the Supreme Court’s decision will mean for our state:

“The Supreme Court ruling today provides an incredible opportunity to create jobs and improve the health of Mississippi residents.  Mississippi’s leaders should capitalize on the opportunity and proceed with full implementation of the Medicaid expansion.  The federal government will provide 100% of the costs of the expansion up front and 90% when the expansion is fully implemented and provide health insurance to roughly a quarter of a million Mississippians.  Furthermore, the Act is a huge economic opportunity – bringing in over $10 billion from 2014 to 2019 that will support job creation in the health care sector.  Finally, choosing not to expand Medicaid would be grossly inequitable. While people earning wages above the poverty line would receive tax credits to purchase health insurance, low wage working adults not earning enough for tax credits would be left out of the program and at be at risk of going uninsured.”

◊Statement of Robert Greenstein, Center on Budget and Policy Priorities President : Court Decision Will Allow Health Reform to Bring Major Benefits to the Nation, Especially if States Do Their Job