A piece of legislation moving through the Mississippi House would set aside $10 million in public tax revenue for funding private school tuition. The $10 million for private school subsidies would be supported by tax credits to individuals or businesses who contribute to an organization providing private school scholarships. Students eligible for the scholarship would be those living in an attendance zone for a low-performing school that are either enrolled in a public school or entering kindergarten.

MEPC has several concerns about the legislation as it moves forward in the House after passing the Education Committee on January 30th. The Center’s concerns for HB906 include:

Last year alone, Mississippi underfunded public education by $259 million. This proposal further pulls resources that would be available to struggling public schools to cover the cost of teacher assistants, books, and other critical needs. The proposal takes $10 million that could be invested in public education and diverts it to private schools through tuition scholarships. 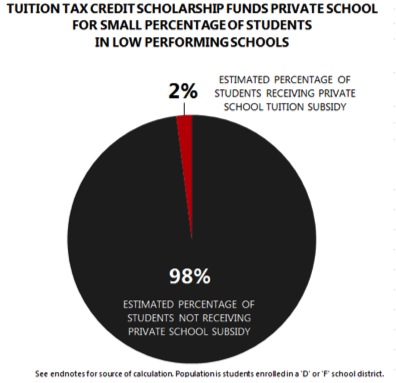 A better approach would be using the $10 million to make targeted investments in these public schools, so all students potentially benefit. Several proposals before the Legislature make investments in literacy training for students, in pre-kindergarten and in scholarships for teacher training. These proposals stand to advance the quality of public education for all students, and targeting resources toward these proposals is a more effective approach than allocating $10 million to private schools.

The funds for private school tuition would support scholarships for approximately 2% of the students currently enrolled in a low performing¹school district.² This means less than 1 student in every classroom has the potential to receive scholarship funding, leaving thousands of students in struggling schools.

Mississippi has invested great time and resources in developing a high quality rating system for public schools, so parents can compare schools and monitor their quality. Private schools are not rated by the same standards. This lack of rating for private schools means that $10 million in public tax dollars could be used to support private schools of unclear quality with uncertain benefit to students.  Evidence is mixed at best on whether subsidizing private school tuition improves academic outcomes of students.

CONCLUSION: Mississippi faces several years of underfunding public education by hundreds of millions of dollars. These proposed tax credit scholarships would transfer $10 million away from public schools to subsidize private school tuition for a small percentage of Mississippi students. This is the wrong approach for Mississippi’s children and the wrong approach for strengthening public education for all students. A better approach is increasing investments in broader strategies that increase literacy, early childhood education and teacher quality for all Mississippi students.

²MEPC calculates number of the students in ‘D’ or ‘F’ schools that would receive scholarships funding based on the $9.3 million available for scholarships each year divided by the estimated value of the scholarship per student. MEPC estimates the value of the scholarship at 90% of the state per pupil expenditure in 2011 of $4,101 as specified in HB906. Based on this calculation approximately 2,576 students could receive a scholarship compared to the 114,000 eligible students that currently attend a ‘D’ or ‘F’ school. The student enrollment of 114,000 was stated during the House Education Committee meeting on January 30. Other estimates site 2,200 students would be eligible, further decreasing the percentage of students receiving the funds.