Lawmakers proposed several big tax cut proposals during this year’s legislative session. Tax cuts were ultimately rejected by the state’s House of Representatives in a fiscally responsible move to maintain the revenues necessary to move the state forward through investments in education and infrastructure. As revenues continue to recover, we can start making progress toward better schools, bridges, health care, and more. Tax cuts would not only jeopardize our recent progress but also our ability to make progress in the future.

Not the time for tax cuts

Mississippi’s state budget looks better than it has in quite a while. Revenues are climbing, and the state’s rainy day fund is full. However, the state is still climbing out of the deep hole caused by the recent recession.

Despite recent progress, K-12 school funding is still down $623 per student since before the recession, and there are 2,250 fewer teachers in the classroom. Mississippi’s universities have seen their funding cut 25% per student and tuition has been raised accordingly, making a college education unaffordable for more people. One in five bridges in the state needs to be repaired or replaced. Rural hospitals in the state are struggling to make payroll and keep their doors open because the state has failed to make investments in health care. 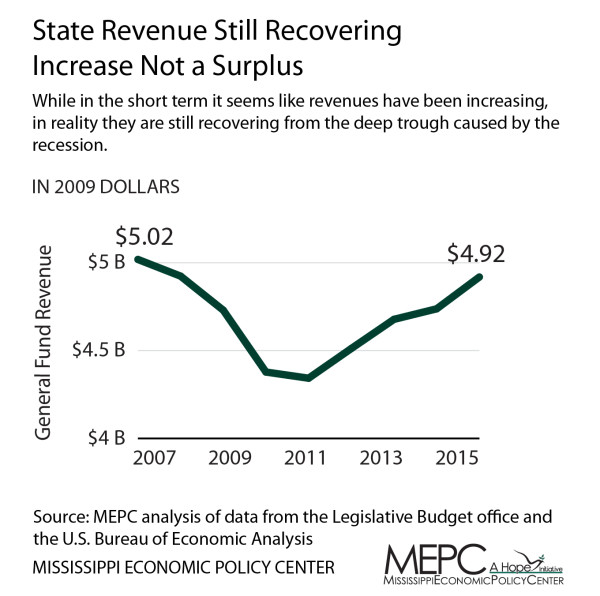 Cuts and the fiscal outlook

Big tax cuts in other states have worsened their fiscal conditions. Cuts have depleted their reserves, required them to prop up their budget with one-time funds, as well as make cuts to priorities, like education. In Louisiana, the budget had been propped up with rising oil prices after they enacted cuts several years ago, but their budget it now struggling with the drop in oil prices. Earlier this year, two out of three major bond-rating firms, which examine state credit worthiness much like consumers get a credit check when they borrow money, downgraded the Louisiana’s fiscal outlook from stable to negative.

Kansas, which has garnered great attention with big tax cuts and bold claims that they will boost the state’s economy, has seen job growth that lags behind the nation. Bond rating firms, rather than just revising their fiscal outlook, actually downgraded the state’s bond ratings due to the cuts.

Mississippi’s outlook was deemed “negative” in 2013 by Fitch, a bond-rating firm, and it has remained negative since then. One of the areas Fitch looks at when rating states is whether they have adequate revenue or too stringent spending limitations stating: “an inability to generate sufficient revenue to fund needed services due to political or other practical concerns can have long-term implications for an issuer’s financial and economic health.”

The firm cited Mississippi’s use of one-time funds in its decision, but that was not the only thing the firm raised concerns about. It also cited Mississippi’s poverty, saying that “the state’s socioeconomic profile is relatively weak, with wealth and educational attainment indicators that significantly lag national levels.”

To address these concerns, Mississippi needs to maintain public investment in K-12 and higher education, health care, and infrastructure. Big tax cuts would have not only been fiscally irresponsible for our state as they have for other states, they would have jeopardized our progress toward addressing poverty and educational attainment.