What Does the Minimum Wage Buy in Mississippi?

MEPC’s blog regularly looks at how the median (middle) Mississippi family’s income has not risen over the last decade. A recent report by the Federal Reserve also found that household wealth for the median family is back to the levels of the 1990s after substantial losses during the 2000s.

But what about workers on the lowest end of the wage spectrum? How have these workers faired over the last 20 years when looking at the expenses families encounter?

Mississippi’s minimum wage is connected to the federal minimum which adjusts with the national rate. In 2010, workers earning minimum wage took home $7.25 per hour, an amount substantially below the $12.63 per hour one Mississippi worker needs to cover their basics and have modest savings. It is less than half of the $17.84 one adult with a pre-schooler needs to cover expenses and save.

Mississippi’s workers earning minimum wage have to work more hours to cover important expenses like child care and university tuition than they did two decades ago. In 1990, a worker earning minimum wage had to work 821 hours to pay for full-time child care for a year, and in 2010 the same worker had to work 990 hours to cover the cost of year-round care, equal to 25 weeks of full-time work (See chart).

Similar trends are seen with Mississippi’s university tuition. An adult worked 502 hours at minimum wage to cover the cost of tuition for themselves or their child in 1990. By 2010, minimum wage earners worked 699 hours to cover tuition and fees for one academic year, a 39% increase in hours. 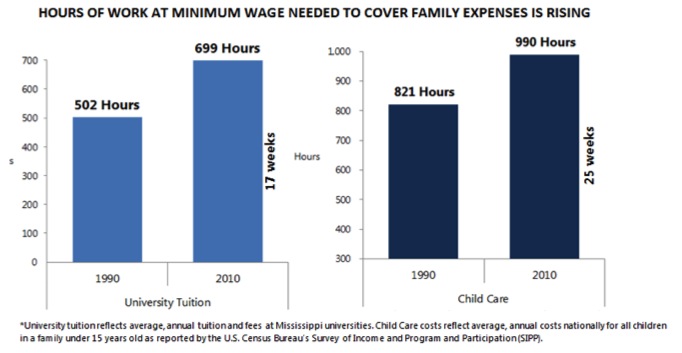 Both childcare and higher education are essential for working families and their ability access to economic security in the long-term. For workers on the lower end of the wage scale, both of these important costs are more expensive than they were 20 years ago. While covering child care equates to 25 weeks of work for a Mississippi minimum wage earner, the reality is that families have many other expenses aside from child care that are equally if not more essential like food, housing, health care, utilities.

Covering all these costs is increasingly out of reach for those earning amounts near the minimum wage and beyond. These findings underscore both the importance of public supports and programs that reduce these expenses for families and initiatives that move more working adults to quality-wage employment.