JACKSON — Payday and small business lenders are not always welcome business development on the municipal level, in no small part because of the cycles of poverty easy-to-obtain, high-interest loans can feed. In Jackson, Ward 4 Councilman De’Keither Stamps has recently introduced a one-year moratorium on such businesses to the city council. Other Mississippi cities have passed similar restrictions on lenders too—some using zoning regulations to keep them away. In the state, however, these institutions hold more sway.

The Hope Policy Institute monitors payday-loan legislation, and Chief Policy Officer Ed Sivak says one bill is still alive this session that does not seem to align with the state’s current statutes on payday lending. The state’s current payday lending and title loan statutes prohibit lenders to rollover and extend loans by charging a fee. A lender can charge no more than $20 per $100 on loans up to $250. For loans between $250 and $500, lenders can charge $21.95 per $100. 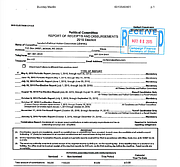 The Mississippi Credit Availability Act, which is now on the House calendar, Sivak says, does not seem to offer the same protection as the state’s statutes that prevent those taking out loans from being stuck in a cycle of lending afterwards.

The Mississippi Consumer Finance Association, a nonprofit that promotes and lobbies for its members in the personal loan business in Mississippi, donates widely to lawmakers’ election campaigns with its political action committee—particularly Republicans and those lawmakers who sit on or chair both Senate and House Banking and Financial Services Committees.

The association’s PAC arm—the LEN PAC—spent more than $100,000 on state official and legislator election campaigns in 2015, campaign-finance records show. There are only three LEN PAC campaign-finance reports from the 2015 election cycle available on secretary of state’s website. When contacted, the association did not offer comment about their legislative priorities, PAC spending or annual convention details by press time.

Eleven finance and loan corporations donated more than $50,000 to LEN PAC by June 9, 2015. Six of those organizations are from out-of-state, but the PAC’s largest donor, Tower Loan LLC based in Flowood, gave the PAC $15,600. Over half of the current Senate and House of Representatives (Republicans and Democrats) received donations from LEN PAC. More than 100 current legislators received $500 or more each from the PAC.

Editor’s note: these numbers are from the three campaign finance reports for LEN PAC available at press time. More reports were added to the Secretary of State’s website last night, and this article will be updated to reflect those new reports today.