In two special joint meetings, the House and Senate committees on transportation heard briefings from the Mississippi Department of Transportation and the Mississippi Economic Council about the urgent need to fund maintenance projects for the state’s roads and bridges.

The State of Roads and Bridges in Mississippi

The Department of Transportation reported that more than one in five (23%) of the bridges in the state are deficient and that four in every ten miles (42%) of roads in the state need repair. The most deficient bridges are “posted,” which means that vehicles over a certain weight cannot safely travel on them. A recent Performance Evaluation and Expenditure Review (PEER) study reported that posted bridges across the state are requiring changes to school bus routes in some districts, increasing the cost of bus transportation. The detours also increase the time some children spend on buses. According to the Mississippi Economic Council report, deficient bridges also require detours for first-responders traveling to emergencies and businesses transporting their products. 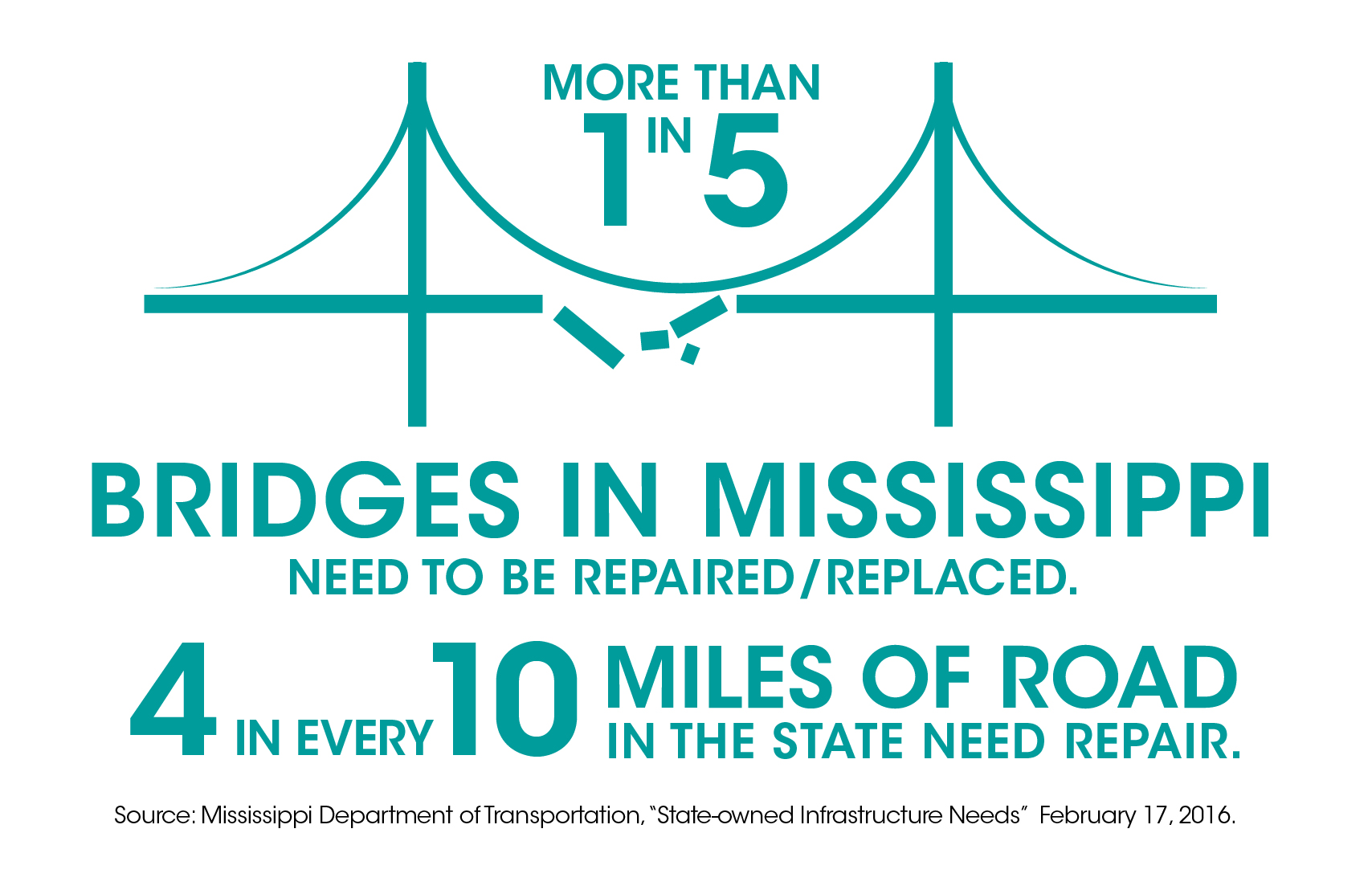 Why a Funding Gap?

Funding for state and local roads and bridges has not kept pace with maintenance costs for a number of reasons. The state’s gasoline tax of 18 cents per gallon was last updated in 1987. Only two other states, Alaska and Oklahoma, have older gas tax rates. Because the tax is based on volume instead of price, collections only go up or down as consumption changes. Mississippi’s gasoline consumption has only increased 1.6% since 1987, despite more vehicles traveling state roads and those vehicles traveling more miles. This is due to the increase fuel efficiency of vehicles over the last 30 years.

How to Fill the Gap

While both the Department of Transportation and Mississippi Economic Council discussed the need for increased funding, from the MEC’s request for a $375 million increase for road and bridge maintenance and the MDOT request for $526 million, neither group presented a specific proposal for a tax increase. The Mississippi Economic Council’s report included a “menu” of options for raising revenue including increasing the gasoline tax, increasing the sales tax, and increasing vehicle registration fees, among others.

As was discussed in a Center on Budget and Policy Priorities report released earlier this week, investments in infrastructure can create jobs and boost a state’s economy, while also, in the case of roads and bridges, improving conditions for those traveling our roads.

While Mississippi lawmakers are considering increasing taxes for roads and bridges, some have said that they would only support that move if the increases are offset by other tax cuts. However, there are several considerations that should be used in any discussion of tax cuts.

Who will benefit? One consideration for any offsetting tax cuts is who will benefit from the proposed cut. A gas tax or sales tax increase, as a consumption tax, would place the greatest burden, as a percentage of income, on Mississippi’s working families who are already struggling to make ends meet. However, a gas tax rebate administered through a state Earned Income Tax Credit would provide a targeted cut for working Mississippi families making up to about $50,000. In contrast, the elimination of the franchise tax alone and/or enacting other broad income tax cuts would mainly benefit corporations and wealthy Mississippians.

How much will it cost?  The other main consideration for offsetting tax cuts is how much they will cost. Good, transparent analysis of the costs of any tax cut proposal is key to evaluating a proposal’s merits. Fiscal notes are needed to make sure lawmakers and the public have the information they need to have an informed debate on any offsetting tax cuts. Pairing tax increases earmarked for roads and bridges with equally large offsetting cuts that would reduce the general fund, would threaten other priorities like education and healthcare.

Funding improvements to the state’s road and bridge system will likely be discussed throughout this year’s legislative session. Continue to follow Hope Policy Institute’s analysis of Mississippi’s state budget and tax system on Facebook, Twitter, and the #PolicyMatters blog.